Amazon, according to a complaint filed by a group of 19 consumer and privacy rights organizations, is illegally collecting voice recordings of children. These recordings allow the mega-retailer to identify children, and persist even after parents have deleted them.

Amazon is never far from the headlines when it comes to data privacy. Earlier this year, the mega-retailer was hit with a major data breach, which came just days before Black Friday, the busiest shopping day of the year.

There have been more disturbing stories to emerge from Amazon. Last year, it was revealed that the company had a team of employees listening to recordings made by the Alexa smart speaker hub. The idea was to improve the voice recognition capabilities, but staff also claimed that they had heard crimes and assaults being committed but were powerless to act or trace the source, as Zak Doffman wrote for Forbes.

Amazon is Collecting Data on Children

The latest accusations made against Amazon relates to its Echo Dot Kids Edition system. This is a ‘child friendly’ version of its ‘smart speaker’ system that allows kids to ask questions, play music, and access other online content.

The terms and conditions of the service, which parents are required to sign up to before their kids use it, explicitly mentions a piece of US legislation, the Children’s Online Privacy Protection Act, also known as COPPA. This 1998 law strictly limits what data companies can collect about children without permission from parents.

The 98-page complaint, sent to the FTC last week, alleges that Amazon are in breach of the COPPA in two key ways.

The first is that the Echo Dot Kids system is apparently listening to children when it shouldn’t. Whenever the Echo Dot hears an activation word, it starts recording, whether parent’s have explicitly approved this or not.

This has made privacy and consumer rights campaigners mad, and rightly so. It’s one thing to collect data on adults who (should) understand the risks. It’s quite another to collect information on children.

“It is incredibly important not only that Amazon fix these problems but that the FTC enforce COPPA,” Josh Golin, executive director of the Campaign for a Commercial Free Childhood,  an advocacy group based in Boston, told the Washington Post. “What we need is a COPPA cop on the beat.”

The group have also published a video demonstrating that Amazon keep recordings of children long after parents request they be deleted. “Parents,” CCFC states, “not Jeff Bezos, should be in charge of children’s data … The FTC must hold Amazon accountable for blatantly violating children’s privacy law and putting kids at risk.”

It’s worth noting that a spokesperson for Amazon said the company complies with federal privacy laws and that its policies are disclosed on its website. It remains to be seen what action – if any – the retailer will take in relation to the latest complaint.

We suspect, though, that nothing will change.

That’s because the data that Amazon is collecting – both on children and adults – is big business, and generates huge profits for the company. It is in their interest, therefore, to compromise your security where they think they can get away with it.

Tech Companies Vs. The People

At a broader level, the recent row is part of an ongoing battle between privacy advocates and tech companies. Many companies like to sell their devices, apps, and services on the basis that they are private and secure, and so there is a deep hypocrisy in Amazon listening in on their customer’s voice recordings.

This is not a debate that is going to go away. The smart speaker market is forecast to hit $200 million globally this year and $500 million by 2023. Products like the Echo Dot Kids are part of this expansion, and Amazon clearly think that marketing smart speakers to children is a viable way of expanding the market. The service made many claims that it was family-friendly, secure, and safe. These claims are now unraveling.

Neither the Echo Dot Kids Edition, nor Amazon themselves, are the only culprits here. Many smart speakers listen in even when you don’t ask them to, and the companies behind them often retain recordings of your voice.

This would not be such a huge problem if consumer’s knew about it, and accepted this invasion of privacy as the price of using such services. Unfortunately, most people don’t know much about the way in which their data is actually used and stored. 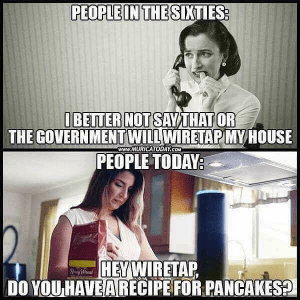 Many smart-speaker owners don’t realize it,” reported the Washington Post this week, “but Amazon keeps a copy of everything Alexa records after it hears its name. Apple’s Siri, and until recently Google’s Assistant, by default also keep recordings to help train their artificial intelligence.”

Amazon are also not the first company to find themselves accused of breaking the terms of COPPA. The FTC, which has declined to comment on the planned complaint against Amazon, has settled 30 cases against companies for allegedly violating COPPA over the past two decades. The commission also updated the rules governing compliance in 2013 to impose restrictions on the collection of newer technologies, such as online voice and video clips, that could identify children under 13.

What To Do About It 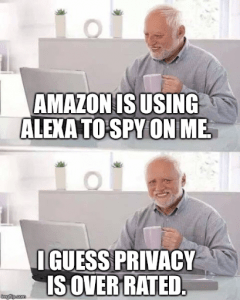 Unfortunately, the recent complaint against Amazon is only the thin end of the wedge when it comes to companies violating your (and your children’s privacy).

Thankfully, there are some pretty easy things you can do to protect your privacy online. The first, and most important, is to make sure you understand how the services you use store and use your data. You can do that by reading articles like this one, so well done you!

When it comes to specific allegations against Amazon, you might feel that the company’s data collection is just the necessary cost of using their services. That’s fine, but you can still limit your vulnerability by turning off your smart speaker when you (or your kids) aren’t using it.

More generally, there are plenty of tools out there that will help you to protect your privacy online. Using the ‘anti-tracking’ tools that are built into your browser is a good place to start. Using the ‘incognito’ or ‘private browsing’ function is also a good idea, but be aware that this only affords limited protection against tracking, and will not keep you (or your children) totally anonymous.

Beyond this, we’ve put together plenty of information on how to protect your internet privacy. One great way of doing this, of course, is to use a VPN like PureVPN, which will hide your identity online and encrypt all the information you exchange with Amazon or any other site.

You can also use a VPN to protect everybody who uses your router to connect to the internet, including your children, by installing our VPN on your router. That way, everything your family does online will be extra secure and private.

Protect Yourself (and Your Children)

Ultimately, the responsibility for keeping your children safe online rests with you. If you don’t take your online privacy and security seriously, no-one else is going to.

Though Amazon (and plenty of other companies) make a big deal about how secure and family-friendly their services are, don’t be fooled. In the end, these companies make a lot of money by selling your data (or logs of what you do online) to third parties. It’s in their interest to know what you are doing, where you are shopping, and what you are buying.

And whilst you might not mind Amazon knowing what you do online, letting them collect data on your kids is a really bad idea. Your children, after all, can’t give consent to have their data collected, and it might be that 20 or 30 years in the future they regret asking Alexa to search for particular items.

Here at PureVPN, we think that everyone deserves privacy, and that you should have control over the data that is collected on you and your family. That’s why we’ve built a VPN that is the most secure in the world, and is designed to prevent anyone – Amazon or any other company – from collecting data on your activities.

Sadly, we don’t think that the headlines about Amazon (and others) breaching your privacy are going to stop anytime soon. The best response, therefore, is to be proactive about your own security, and that of your family.

Trust us, your children will thank you for it one day.

The Trauma of Snapchat Cyberbullying

How To Protect Your Baby Monitor From Being Hacked

14 Hazardous Social Media Apps Kids Should Not Use