Beef up your online security and privacy of your chats with the best secure messaging apps available on Android and iOS devices.

It’s no brainer that we all communicate through our messaging apps. And, it’s no rocket science that we want to keep our private conversations private!

From awkward first time conversations with your crush to office gossip, or opening up about your feelings, no one wants their private conversations to be seen by third-parties nor be swamped with unnecessary ads.

The fact of the matter is that unless you’re secured with an encrypted messaging app, you’re simple exposing your private chats out in the open.

How to choose a secure messaging app

There are dozens of messaging apps available on the Play Store and the App Store, but not all of them offer the security they claim to provide. When choosing a secure messaging app, it goes without saying that you should opt for an app that offers end-to-end encryption by default.

Here’s a list of the top 5 best secure messaging apps:

Signal Messenger, initially released in 2018 is free and open-source software that is headquartered in Mountain View, CA. Signal messenger gained widespread recognition for being the most secure messaging application available in the market.

Signal is an instant messaging, voice calling and video calling application that is available on iOS and Android phones. The app uses end-to-end encryption protocols that secure any and all messages sent to other Signal users.

What’s interesting about the app is that it has an integrated mechanism for authenticating that no man-in-the-middle attack occurs.

Learn more about the best security apps for Android.

By far, the most popular and widely used messaging app, WhatsApp, has over 1 billion active users. With an easy-to-use interface, WhatsApp offers features such as location and file sharing, gifs, and even desktop support.

The app comes equipped with the industry’s highest level of encryption protocol. The encryption features Perfect Forward Secrecy (PFS). What this encryption standard means is that if a snooper intercepts your communications, all they’ll be able to see is the last message you’ve sent. Everything else will remain private.

To fully secure your communications, however, you’ll need a robust VPN that is renowned for offering highest-graded encryption. Learn more about WhatsApp’s encryption.

Skype is a widely popular messaging app that’s used by businesses and individuals alike. Skype claims that all Skype-to-Skype voice, video, file transfers, and instant messages are entirely encrypted. The encryption offered by Skype protects you from vulnerabilities such as eavesdropping by malicious users.

Skype uses the AES (Advanced Encryption Standard*), also known as Rijndael, which is used by the US Government to protect sensitive information, and Skype has, for some time, always used the strong 256-bit encryption. User public keys are certified by the Skype server at login using 1536 or 2048-bit RSA certificates. 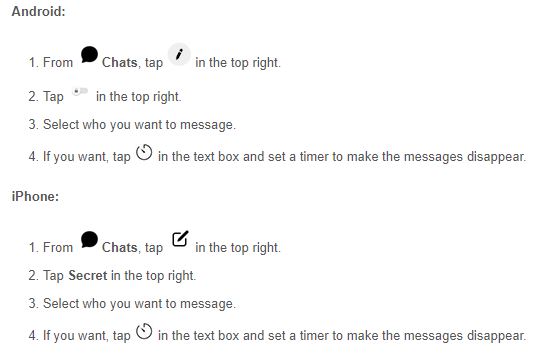 Secret conversations are currently only available in the Messenger app on iOS and Android, so that they won’t appear on Facebook chat or messenger.com. Learn about Facebook scandal.

Telegram gained popularity in 2014. The app has over 100 million users and offers excellent features that are appreciated by many. However, the app doesn’t seem to provide just an adequate level of security needed in today’s massively monitored digital world.

Strange face about Telegram: the app doesn’t offer encryption by default. To have encrypted conversations, you need to switch on the encryption option manually. While cybersecurity experts see this is a significant flaw, it’s worth mentioning that it’s much better than other messaging apps.

While there are several other messaging apps available in the market, they don’t offer topnotch encryption nor have a credible track record. Your best bet is to use industry-recognized secure messaging apps and always use a VPN to ensure your messages, voice calls, video calls, files, and much more are secured with the highest grade encryption.

Secure Messaging Apps
Ather Owais Ather Owais is a tech and cybersecurity enthusiast. He is a strong advocate for online privacy and security, following technological trends and their impact on today's digital era.

What is Whitelisting and how does it work?