Understanding the Difference Between a Modem and a Router

Whether you’re new to the Internet or have been using it for a while now, you’ve probably heard the terms router and modem. However, do you understand what these devices are and how they work? If your answer is no, then you’ve come to the right place – we’re here to explain!

Understanding the difference between a modem and a router will go a long way in helping you make smart decisions. For example, you could save anywhere from $7 to $14 per month by purchasing your modem instead of renting one from your Internet Service Provider.

A router sets up a network between the devices you have at home, whereas a modem allows that network (and the devices on it) to connect to the Internet. Many ISPs also offer a modem router combo, which is a two in one device that performs both these tasks. 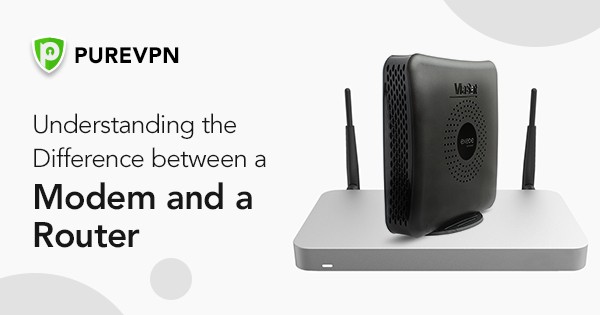 Modem vs Router – A Quick Overview

What is a Router, and How Does it Work?

A router, also sometimes referred to as gateway, connects one network to another by passing traffic between them. In simple words, it acts as an intermediary between your local area network and the Internet – especially when it comes to your home network.

Routers not only let you connect several devices to the Internet via a physical Internet connection but also enable them to communicate with each other over the local area network. They offer some degree of protection to your devices by not exposing them to the open Internet.

Besides, these devices sit in between your private network (your LAN) and the public network (the Internet), routing traffic back and forth. Most router brands have built-in switches, which let you connect a number of wired devices.

Many also feature wireless radios so that you can connect Wi-Fi devices. However, you can’t connect your device to the Internet directly with only a router. Your router needs to be plugged into a modem so that your traffic can be transmitted over your Internet connection (cable, dial-up, etc.).

Advantages and Disadvantages of a Router

Here are some common types of network routers:

A wired router is a box-shaped device that connects directly to a computer using wires connections. One port is used to connect a modem for receiving data packets, whereas the other set of ports allow a wired router to connect computers for distributing data packets. These routers use SPI firewalls for security while enabling communication between multiple computers on a network.

As with a wired router, wireless routers connect directly to a modem via cable for receiving data packets. But instead of transmitting data to computers through cables, it distributes data packets with antennas. These routers protect the WLAN using WPA (Wi-Fi Protected Access) security and MAC (Media Access Control) address filtering.

What is a Modem, and How Does it Work?

A modem – short form for modulator/demodulator – is a hardware component that acts as a digital translator. Basically, it converts data into a suitable format so that it can be transmitted between devices (historically over telephone lines).

While modern broadband technologies like satellite, fiber, and cable don’t really function in the same way, the term modem is still used. How your modem plugs into the network will depend on which connection type you have.

The modem is hooked to your infrastructure and connected to any router (or even a computer) using an Ethernet cable, giving you Internet access. However, not any modem will work with your Internet Service Provider.

Since different services require different types of hardware, most ISPs rent their modems to consumers for a monthly fee. But you can purchase one of your own to save money in the long run – just make sure it’s compatible with your ISP!

Advantages and Disadvantages of a Modem

Here are some common types of Internet modems:

An external modem can be defined as a self-contained modem that doesn’t comprise of a router. It’s attached directly to a computer using the USB or serial port. External modems will usually be connected to a standalone router so that you can share your connection with network nodes around the office or home.

An integrated modem, on the other hand, is a modem built into a computer (typically as a PCI or USB card). Since most people have multiple computers, smartphones, and other devices they want to access the Internet on, this type of modem has become outdated as it only permits one computer to establish a connection with the Internet.

Modems can also be categorized according to the type of Internet service you use. These include dial-up, DLS, cable, and fiber modems. While DSL and cable are the most common, you can speed up your Internet connection by leaps and bounds with fiber optic access. Dial-up modems, however, are no longer used by people as we now have high-speed broadband Internet.

As mentioned, some ISPs rent router and modem combo devices. These are equipped to perform both functions, i.e., serving as a modem that provides an Internet connection and working as a router to build a home network. They may also be bundled with a phone interface so that you can use your ISP’s VoIP offerings.

Having a combined modem and router does have its advantages. Take, for instance, you’ll have one less device to worry about. But there are also certain disadvantages that you need to be aware of. For starters, the whole thing would be useless if one part malfunctions. You won’t be able to upgrade one device at a time, either.

Furthermore, it restricts what you can do with your network. By using a separate router and modem, though, you can make sure you have devices of the best possible quality. Not to mention, you can save some hard-earned money if you get your own modem and router, rather than renting a combined unit from your ISP.

What about Mesh Wi-Fi Systems?

Unable to get full Wi-Fi signals in your home? If so, you could consider purchasing what’s called a mesh Wi-Fi system. It’s a series of wirelessly connected nodes that you place throughout your house for enhanced reliability, consistent speeds, and greater coverage.

Kits typically include two to three identical components and the setup doesn’t require a router or extender. One assumes the role of a router by connecting to the modem and then all traffic is routed to and from the nodes.

The result? Instead of a single device transmitting an Internet signal in your home, you have several components enhancing your Wi-Fi experience with a broader area of coverage. However, the downside is mesh Wi-Fi systems don’t come cheap!

The following are some commonly asked questions about router vs. modem:

Do you need a router if you have a modem?

Yes, you can if you have a router modem combo device. But if that’s not the case, a modem would only be able to provide an Internet connection for a single wired device. You’ll need a router to create a wireless network that all your devices can connect to.

Can you use a router without a modem?

Absolutely! You can set up and use your router without a modem. Though you won’t have any Internet connectivity, you will be able to send files from one device to another, stream a video from your phone on your smart TV, and more.

Is it better to buy your own modem and router?

Purchasing a router and modem is going to cost you upfront, but they’ll eventually pay for themselves in the form of lower monthly Internet bills. Most tech professionals recommend buying separate devices, but a combined unit should get the job done if you’re looking to keep things simple. Regardless, you’ll save money in the long haul.

Got any questions? Feel free to use the comments section below, and we’ll get back to you as soon as we can!