When we think of ID theft scams, we start producing pictures of hardcore computer hackers breaking secret codes and passwords. However, 19-year-old Luis Flores and his 41-year roommate Kyah Green proved that even nerds can do the job. Compiling a large amount of private information from the web, the hackers successfully bilked large sums of money from the American Express bank accounts of their victims, including Kim Kardashian. The confidential information is said to have been carefully but easily sourced from leaked information on hacking websites, social networking profiles and insecure internet activities of victims.

The identity theft sammer carried out their game from a small apartment in Lake Mary, Central Florida. On May 19, 2013, Flores called American Express claiming to be Kim Kardashian. AmEx customer service ensured the identity of caller as Kardashian having received correct responses to several security questions (presumably that related to Kardashian’s SSN, credit card number, mother’s name etc.), and granted access to the account. 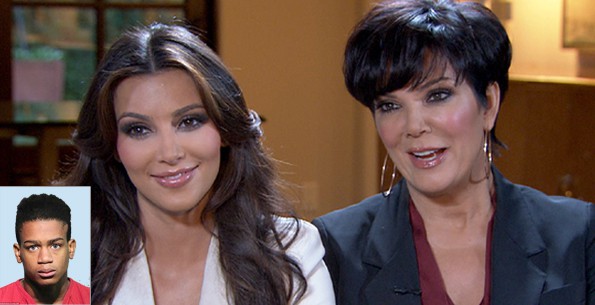 Kim Kardashian (on left) with her mother Kris Jenner (on the right) who were targeted by Luis Flores (ID theft scammer) in their credit card scam.

Identity theft scammer in small picture: On Aug. 7, 2013 Secret Service arrested Luis Flores, age 19, on account of stealing celebrities personal information and using it to steal from their credit-card and bank accounts.

Without a minute, the impersonating Flores changed the primary social security number associated with Kardishian’s account to his own name. He also changed the address on the account to his own address of Lake Mary, Florida, and ordered a replacement card. On May 20, he ordered 2 more ‘emergency replacement cards’ one for Kim and another for Kris and two days later, Flores signed all three cards.

All set, any transaction made on Kim’s or Kris’ cards were to have Flores’ address and SSN. Flores could keep an eye on bank statements of any of his booties. Initial police report shows that ID theft scammer made two wire transfers ($65,000 and $6,251.99) from Kris Jenner’s account in May/June to their own SunTrust Bank. The withdrawals of the stolen money were even smarter. This task was effectively performed by Green, who made use of different ATM machines to make 11 withdrawals, revealed video surveillance tapes upon the probe that followed.

Although interrogated on June 26, Flores and Green kept on with their task, with Flores calling AmEx again on July 11 calling himself as Kris Jenner. But since the police had already flagged their activity and laid additional PIN security for the affected accounts, Flores could not make this time and confirmed this ID theft scammer involvement once again.

Arrested on August 7, Flores remains in Orlando’s Seminole County Jail, while Green is released without bail.

According to reports, the hackers were able to gain access to their victims’ personal information and credit reports. Although the exact source of the information remains a mystery, it is clear that hackers took advantage of weak privacy grips and insecure internet browsing by their victims. It is likely that the secret information related to security questions demanded by American Express bank for replacement was ‘too obvious’ or public. Or, more commonly, the hackers simply piled up various bits of data from different sources into one large, meaningful information set.

This ID theft scam is a significant breakthrough into a probe led by FBI officials since March this year. The story proves that anyone using the internet with weak privacy measures can easily be a victim of ID theft scams. While it will take time until Flores and Green reveal the truth about their hacking methodology, you must understand the significance and risks posed by weak privacy protocols over the internet. It is always wise to keep your private information as safe as possible, because a stolen ID can be a real pain in the butt for you. Secure you online identity; do not allow any crook to turn your information into hard cash.

ID theft scamsidentity theft scam
PureVPN PureVPN is a leading VPN service provider that excels in providing easy solutions for online privacy and security. With 2000+ servers in 141+ countries, It helps consumers and businesses in keeping their online identity secured.