Turbulence in the Travel Industry Due to Coronavirus

Privacy & SecurityTravelTurbulence in the Travel Industry Due to Coronavirus

What would you do if a coronavirus outbreak hits your region?

Grab a flight ticket and escape from the area, right? Yes, that may be the first thing any person would consider doing.

But what if you are seated among an infected patient on the same flight? (And what if you’re asymptomatic and are putting others at the flight at risk?) That would be troublesome and not only for you but also for billions of people across the globe due to the ripple effect that happens from social contact.

It is because of such traveling in a panic that the COVID-19 virus, aka Coronavirus, has spread its roots in more than 124 countries.

Moreover, it has also brought upon destruction to the travel industry globally.

What is Coronavirus and How Has it Affected the Travel Industry?

COVID-19, which you may know as the coronavirus, is a disease that emerged in China in December 2019 (hence the -19 designation at the end of its name). Public health officials suspect that the epidemic may have originated within the live-animal market in Wuhan, China. Others believe that it originated from bats and then transferred to humans.

Regardless, the virus has extended its roots to such an extent that the World Health Organization (WHO) has officially declared it as pandemic.

Coronavirus is extremely contagious, which means it can spread from person to person very easily. Over the last few months, the toll of infected people has surged to 212,000+ victims with more than 8,700 deaths all over the world.

Coronavirus and the Travel Industry

Because of this pandemic, the travel industry is also experiencing a serious slump because of travel bans. In fact, frequent travelers and vacationers have shown significant concern in this chaotic situation.

According to a study by Big 7 Travel in late February, almost half of the travelers worldwide (42%) who have trips booked in the next 6-12 weeks have already canceled their travel plans or are considering canceling it because of coronavirus.

Austin Tuwiner says “I am ‘stuck’ in Costa Rica. I was supposed to fly back home to the U.S. for a conference in San Francisco at the end of March, which has now been canceled and I cannot fly back home because of my other recent destinations. While this is a huge inconvenience, there are worse places to be stranded than in Costa Rica! However, it could become a very big problem if travel restrictions are not lifted prior to my Visa running out, not to mention the added cost of food and accommodations here when I was not prepared for the extra expense.”

The majority of the Airlines globally have canceled flights amid the warnings from the World Health Organization, with several other airlines suspending their services to the most-affected countries such as China, Iran, and Italy.

In the Big 7 Travel study, it was found that “about 72% of travelers have become more concerned during the coronavirus outbreak.”

The International Air Transport Association has estimated that the global airline industry may incur a record $113 billion loss from coronavirus-related disruptions.

The recently updated forecast is almost four times the estimate from the study conducted by the International Air Transport Association (IATA), reflecting the rapid spread of the coronavirus outbreak to Europe.

Most of the airlines have grounded their airplanes at hangers and implemented different emergency measures in order to minimize their costs.

Already, approximately 25% of airline share prices have dropped since the outbreak started, which is almost 6 times greater than the Severe Acute Respiratory Syndrome (SARS) outbreak in 2002.

Europe’s largest regional airline that served 57 airports, Flybe, also succumbed to the COVID-19 pandemic, completely collapsing and resulting in the loss of more than 2,000 jobs.

The 40-year-old budget carrier airline had its headquarters in Exeter, England, and flew British tourists to regional destinations like Italy and France. 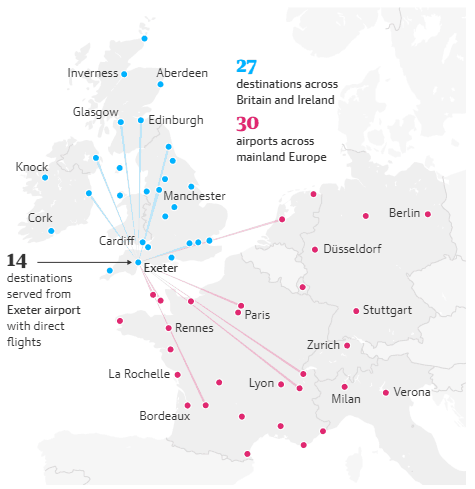 The UK Civil Aviation Authority (CAA) announced early on Thursday morning that Flybe had entered administration, which for those of you not in the United Kingdom, means that the company has declared bankruptcy and has gone insolvent.

The CAA said all flights were canceled and they urged passengers not to go to airports.

All Flybe flights are cancelled. Please do not go to the airport as your Flybe flight will not be operating.

For flights operated by franchise partners, passengers should make contact with their airline.#Flybe pic.twitter.com/O9vQ7mvnR8

According to travel considerations mentioned by WHO on their website,

“Transmission of infection may occur between passengers who are seated in the same area of an aircraft, usually as a result of the infected individual coughing or sneezing or by touch, This is no different from any other situation in which people are close to each other, such as on a train or bus or in a theatre.” 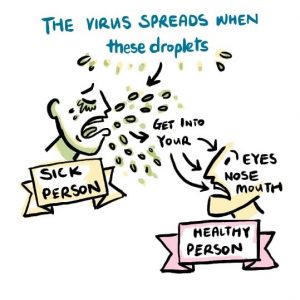 Safety Precautions To Consider Amidst the Coronavirus Outbreak

According to the World Health Organization (WHO), the following safety measures should be taken to avoid the outbreak:

Safety Precautions to Consider While Traveling

If you must travel, take special precautions. To avoid the risk of getting infected while you are traveling, follow these safety measures:

Many public gatherings have been banned or cancelled because the virus is contagious and can travel from person to person. With more than 120,000+ confirmed cases worldwide, this virus has impacted almost every industry.

In fact, it has also resulted in the cancellations of many events, including sporting games, concerts, festivals, and movies.

NCAA canceled all the championship games for the year because of the coronavirus, as it said in an official statement on March 11. President Mark Emmert further added “This decision is based on the evolving COVID-19 public health threat.”

The officials of NBA suspended the games in a statement on March 12 “The NBA is suspending gameplay following the conclusion of tonight’s schedule of games until further notice, The NBA will use this hiatus to determine next steps for moving forward in regard to the coronavirus pandemic.”

The NHL announced in a statement that its season on March 12 has been suspended, following the confirmation that an NBA player tested positive for COVID-19.

They added “In light of ongoing developments resulting from the coronavirus, and after consulting with medical experts and convening a conference call of the Board of Governors, the National Hockey League is announcing today that it will pause the 2019-20 season beginning with tonight’s games”

The MLB suspended all spring training games in a statement on March 12 and that the 2020 opening day will be delayed by at least two weeks due to the coronavirus pandemic.

2020 Opening Day to be delayed by at least two weeks; Spring Training Games cancelled beginning today; and @WBCBaseball Qualifier games postponed indefinitely due to the national emergency created by the coronavirus pandemic. pic.twitter.com/yCgUHkdfpF

The officials of Tomorrowland tweeted “In the beginning of February, the build-up of Tomorrowland Winter 2020 in Alpe d’Huez started. Today, it is with a heavy heart that we have to inform you that the French Government has decided to cancel this year’s edition.”

In the beginning of February the build-up of Tomorrowland Winter 2020 in Alpe d’Huez started. Today, it is with a heavy heart that we have to inform you that the French Government has decided to cancel this year’s edition (March 14 -21): info & updates: https://t.co/lyjg3dBqMg pic.twitter.com/brE0xRKAX3

The state of Pennsylvania postponed the upcoming Travel and Adventure show in the light of COVID-19.

IMPORTANT UPDATE ⚠️ #PhillyTravelShow POSTPONED
This afternoon, the State of Pennsylvania recommended banning mass gatherings over 250 people due to increasing rates of COVID-19 in the region. We are committed to heeding the expert guidance of public health officials . . . pic.twitter.com/QK5ZyOV4nN

James Bond “No Time to Die”

The release of the James Bond “No Time to Die” has been postponed because of the current Coronavirus outbreak. MGM, Universal and Bond producers, Michael G. Wilson and Barbara Broccoli announced: “After careful consideration and thorough evaluation of the global theatrical marketplace, the release of NO TIME TO DIE will be postponed until November 2020.”

MGM, Universal and Bond producers, Michael G. Wilson and Barbara Broccoli, announced today that after careful consideration and thorough evaluation of the global theatrical marketplace, the release of NO TIME TO DIE will be postponed until November 2020. pic.twitter.com/a9h1RP5OKd

The release of the movie series Fast and Furious 9 has been put on the backburner due to Coronavirus.

The release of #FastAndFurious9 has been pushed back a year due to #Coronavirus: https://t.co/K8gMpMkPEO pic.twitter.com/7PL5tUPwl8

Two of the football match played between Manchester City – Real Madrid and Juventus – Olympique Lyonnais is not taking place because of quarantine imposed on players of Juventus and Real Madrid.

Following the quarantine imposed on players of Juventus and Real Madrid, the following #UCL matches will not take place as scheduled.

Further decisions on the matches will be communicated in due course.

And this is the tip of the iceberg. South By Southwest in Austin, TX cancelled, leaving over 150,000 people unable to attend the annual event. Conferences everywhere continue to be cancelled and postponed in all industries. Weddings, bar and bat mitzvahs, and other events are being shut down too.

On the positive note…

Although there are more than 120,000+ Coronavirus cases, the silver lining is nearly 70,000 patients have been recovered despite the increasing new cases in the United States.

“Broadly speaking, the peak of the epidemic has passed for China,” said Mi Feng, a spokesman for the National Health Commission. “The increase of new cases is falling.” 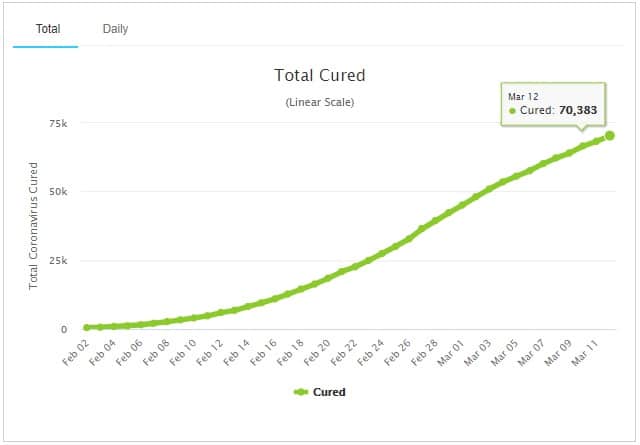 Meanwhile, you can have a look at this visual for your convenience during the Coronavirus outbreak:

Travel Wallet: A Relief for Tourists in 2021

Impact on Tourist Places Due To The Lockdown