Internet usage has increased manifolds over the past two decades. In 1991, internet was used by some 500,000 people. That number has remarkably grown to over 2.5 billion today. According to UN estimates, about 40% of the world will be connected to the World Wide Web by the end of 2013.  Have a look at global internet demographics: 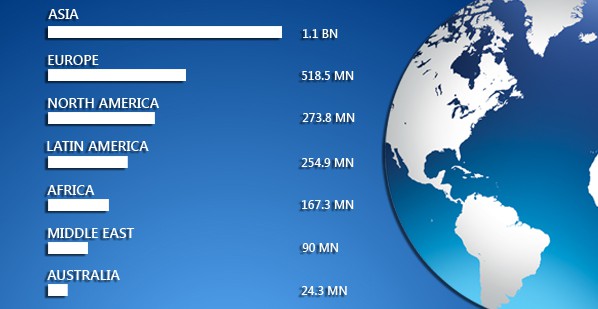 But concerns of lost internet privacy and cyber thefts negate the potential and promise of a more webbed world. Take, for example, our use of social networking platforms. What if all what you did on Facebook, WhatsApp, YouTube, Skype became visible to everyone? The following internet privacy threats point to this:

NSA revelations sparked a lot of hue and cry from internet security experts. In what came as leaks of secret documents by Edward Snowden, we came to know how NSA had been working along tech giants like Google and Microsoft to intercept communications over the internet.

It is also revealed that NSA is using backdoor tactics such as control of servers of big tech companies and the use of decryption technologies to break into any sort of online information. NSA’s program called PRISM is specifically aimed at this.

It was Gmail’s spam-free inbox that stole subscribers away from earlier webmail pioneers: Yahoo and Microsoft.  And though Gmail’s 450+ million users complain little of spam until now, facts revealed by Scroogled is a source of privacy goose bumps for many users. Google is reported to scan its user’s mailboxes to determine ads targeted to the user’s need. While it may not ‘sell’ your email IDs to marketing companies and ad agencies, it has no control over the content of third parties sent as ads in your inbox. Surprisingly, you get to agree to this when you sign up for Gmail.

5 Tips To Protect The World From The Internet Privacy Threat

Most social networks provide options for users to control their online privacy. Since everything you put online leaves a digital footprint, it is advisable that you stick with the tightest privacy settings to avoid regrets in future.  So make sure that you share only the stuff you won’t regret losing.

Read our article on ‘What stuff should I care about?’

A privacy intruder is most likely to attack you once he has identified your location and browsing habits. Anonymous browsing is possible when you choose incognito or ‘do not track’ browsing modes in your web browsers. Alternatively, you can get an IP routing service like those provided by VPN providers.

The most serious threat presented by compromised internet privacy is an access loss to your email. All of the popular webmail services like Gmail, Yahoo! or Live have security loopholes which make your inbox vulnerable to data theft. Hence, you must ensure that your webmail is secured with fool proof security.

Internet encryption allows you to pass all of your network data in an indecipherable digital form. Advocates of digital security stress the use of encryption software to ensure no data thief can ever break into your private stuffs online.

5. Limiting The Smartphone Use

With more than 6.8 billion cellular devices, it is no wonder that more people will reach internet in years to come. But relatively weak security features of mobile devices make internet use a death ring for most users. It is therefore very important that you keep your location data hidden from the surveillance by getting encryption and anonymity for your smart phone as well.

Read our article on,

Internet privacy threat affects 40% of the world population. Surveillance agencies (NSA and GCHQ), identity thieves and hackers are the main players in the privacy hunt game. All of these make use of the same privacy peeking tools like Taped webcam, open Wi-Fi hotspots, Email and phishing. Tightening up your privacy settings and use of strict encryption methodologies can help your fight these snoops to a great extent.

Internet Privacy Threatonline privacy threat
PureVPN PureVPN is a leading VPN service provider that excels in providing easy solutions for online privacy and security. With 2000+ servers in 141+ countries, It helps consumers and businesses in keeping their online identity secured.

5 Reasons Why You Need to Get Your System Hacked

How to Move Steam Games to another Drive