Pokémon Go is all the rage these days, with each and every individual jumping aboard the band wagon without thinking twice. There is no doubt the game has an interesting concept and has managed to appeal to all individuals, regardless of their age, but it has also been deemed a great risk in terms of getting access to a user’s information or data without their knowledge.

It was only recently discovered that users who had installed the game were in fact giving out complete access to their Google accounts, thus making their devices incredibly vulnerable. Fortunately, the same problem was not faced by users enjoying the games on an Apple device.

Upon discovery, a lot of people claimed that Niantic Labs, the developers behind Pokémon Go, will gain complete access to a user's emails and can delete and edit files and documents in Google Photos and Google Drive. Additionally, they also claimed that the developers would also be able to access maps and browser histories. However, Niantic Labs and Google assured its users that this was not the case, which was also backed up by findings by security researchers. 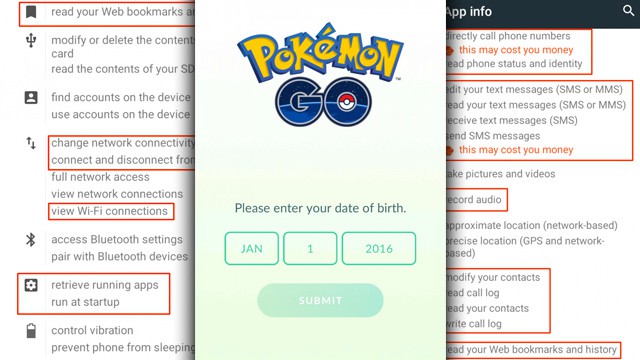 <<< Learn How to Protect Yourself from Pokémon Go Security Risk! >>>

But then again, this does not necessarily mean users are free from any security threats. The primary reason why Pokémon Go requires complete access to one's Google account is largely because the developers utilized an outdated version of Google's sign-in service. Due to this reason users were unable to restrict permissions for the app.

For now, there is no evidence suggesting that Niantic Labs intentionally used an outdated version of the app to gain access to users' information, but they have assured their users that the problem will be dealt with.

Even though the problem has been acknowledged and will be fixed soon, users who installed a malicious version of the app are at great risk as they can become victims of hackers and cybercriminals and can infect other devices at the same time.

The malicious version of Pokémon GO allows hackers to misuse the outdated service, which in turns gives them complete access to one's Google account. Keeping this in mind, it is highly inadvisable to not download, install or share third-party versions of the app floating around on the internet and social media sites.