UEFA Europa League Road to the Final has been amazing for both Inter Milan and Sevilla. The perfect mix of Antonio Conte’s mastermind tactics and Lukaku’s power-pack performance has pushed Inter to the final stage and they have become the favorites to lift the 2020 Europa League Final trophy in Germany.

Moreover, Sevilla tip-toed their way to the final after defeating two English teams, Manchester United and Wolves, and getting a chance to win a European trophy in 2020, they might be the only Spanish team to do so.

You can easily watch Sevilla vs Inter Milan Free with PureVPN on BT Sport YouTube channel in 3 Steps.

2. INSTALL : The PureVPN app on your device.

Summary: No matter the country you are living in, you can check the below-mentioned channels and stream a 90-minute thrilling match. Select any TV channel/streaming service and tune in to watch the 2020 Europa League Final. Are you an existing subscriber of any of the channels mentioned below?

Some streaming channels are region-locked and you may not be able to access the service in your country. But we can help you watch any sports channel on your streaming devices whether you are in the United States, Australia, Canada, Spain, Germany, France, or the United Kingdom, or anywhere else. If you can’t stream any channel due to geographical limitations then use the below guide: 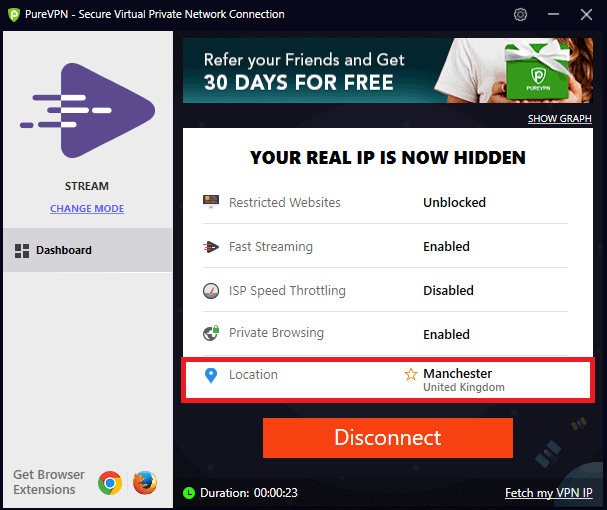 How to Watch Europa League Final on BT Sport

If you are a BT Sport subscriber then you can stream the Final match live on YouTube. But BT Sports only works in the United Kingdom. Therefore you have to either be in the UK to enjoy the live stream of use a VPN app and change your IP address. Here is a way for BT Sport subscribers to enjoy Europe League Final live stream from any country:

How to Watch Europa League Final on SonyLIV

SonyLIV is an Indian streaming service that offers UEFA Europa League live matches to all subscribers. But the catch is you have to either be in India to stream the service or use a VPN app to change your IP address. If you choose the latter option then here is an easy way to stream 2020 Europa League Final on SonyLIV from any country whether you are in Australia, Canada, United Kingdom, United States, Spain, or anywhere else.

Sevilla vs. Inter Milan-Players to Watch Out for:

Romelu Lukaku: Antonio Conte has transformed Romelu Lukaku into a beast at Inter Milan as he is scoring goals and winning important matches for the Italian side in this 2020 season. It seems like Lukaku is really happy at Inter Milan and the switch from Manchester United to Italy was a blessing for him.

Jesus Navas: He may be getting closer to the retirement age but Navas is still a key player in Sevilla’s squad and helping the Spanish team win crucial games especially in European competitions. Jesus Navas assisted the winning goals against Manchester United in the semi-finals so looks like he is still helping Manchester City. Both Inter Milan and Sevilla are in good form and the teams will fight harder to lift the 2020 Europa League Final trophy. The pendulum might swing towards the Italian side as Lukaku is looking to score more goals in the final and Conte’s attacking tactics can help Inter Milan win the game against Sevilla.

The final will be played at the RheinEnergieStadion in Cologne, Germany on Friday 21st August 2020. This German stadium is going to host the first-ever UEFA Club Final in history since 2010.

2. When is the Champions League Final?

The 2020 Champions League Final will be held on 23rd August 2020. The venue is the Estadio da Luz Stadium in Lisbon, Portugal but initially, the location was Turkey.

3. Who is the Europa League Final Host?

Cologne, Germany is hosting the 2020 Europa League Final. The previous knockout matches were in four different venues inside Germany. RheinEnergieStadion is a German football stadium that will welcome the two finalists, Inter Milan and Sevilla.

4. What is the Europa League Final Date?

Stadion Energa Gdańsk is a Polish stadium that is hosting the 2021 Europa League Final. Although UEFA decided the venue to be in Spain initially, you can now watch the 2021 Final in Gdansk, Poland.

Score Predictions from the PureVengers?

We can say that Inter Milan has an upper hand because of their history in European club competitions. Besides this, Antonio Conte has won at least a single trophy during his tenure at Juventus and Chelsea, and he is looking forward to lifting the UEFA Europa League Final cup as well. Our prediction is: Inter Milan vs Sevilla (3-1) with Lukaku scoring a goal or a brace but we can be wrong. All in all, we are hoping for an exciting European clash on Friday night.

2020UEFAfinalEuropaLeaguefinalFootballfansInterMilanSevilla
Sameed Ajax Sameed is a Digital Content Producer at PureVPN who covers cybersecurity, streaming, and weekly news. Besides that, he wastes time playing FIFA, eating pizza, and sending tweets.