This roundup discusses the potential dangers of Facebook, Mark Zuckerberg’s billion dollar project, and how the platform became an easy source for companies like Cambridge Analytica to do whatever they desire. Moreover, we will share how leaked passwords end up on the Dark Web and sold online.

A former Facebook executive, Tim Kendall, lashed out on the most popular social media app and said that these online applications (Facebook, Instagram, Snapchat) are eroding our democratic values. He added that all of these apps are run on a very well crafted model and use many algorithms to make users glued to their screens.

This is something that people like Kendall are afraid of, which is ironic because a few years ago he was actually helping a company like Facebook to get as much user attention as they want.

I guess he saw the power of his ways in a detrimental fashion.

He is right now though:  the future of internet users doesn’t look good. We’re all addicted to sites like  Facebook, Instagram, and Snapchat. And spending more hours on these apps, which have no clear line between misinformation and legitimacy, can be dangerous to any person.

In short, there is too much fake news and manipulation on Facebook that an internet user has no other choice than to believe what he or she saw or reads online.

Alongside Cambridge Analytica, Facebook was under the spotlight because of falsely promoting Donald Trump as the best candidate for the 2016 Presidential Elections. There are many other companies like Cambridge Analytica that use private information for the profiling of voter demographics.

As we have seen in the 2016 US Elections, running online campaigns on Facebook or even Google to get the support of voters was helpful to a Presidential candidate than actually caring about the citizens. Donald Trump knew that and took complete advantage of it. 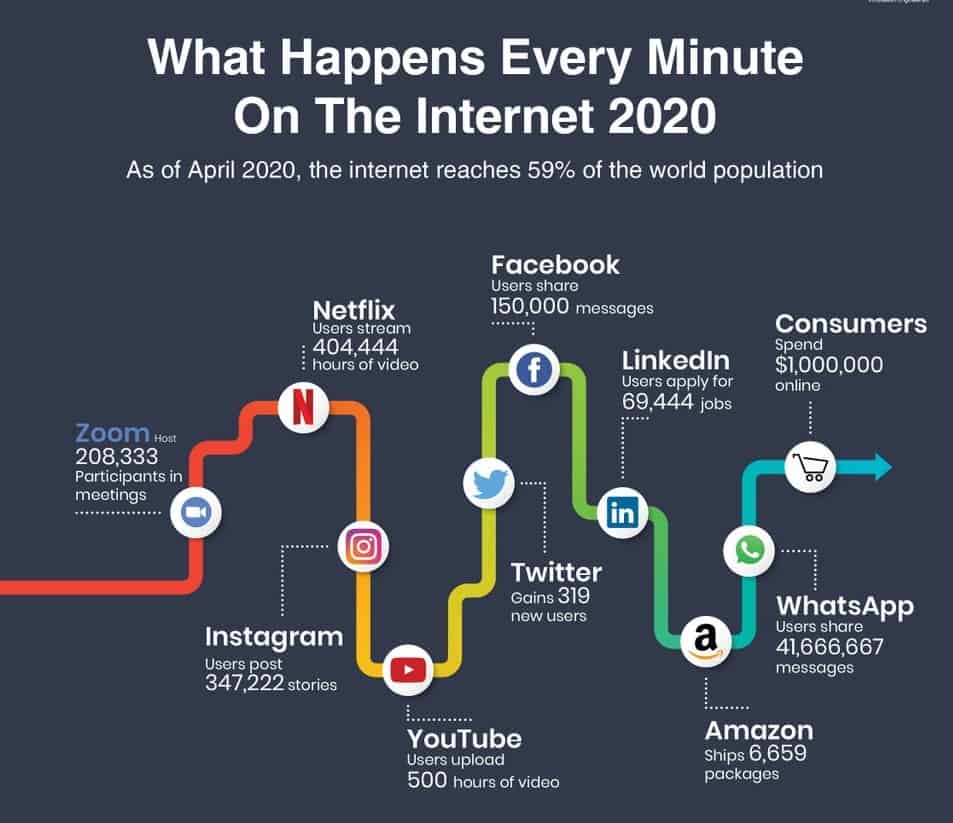 Above, you can see the amount of hours we spend on social media apps and online stores every single day. And giants like Facebook and Amazon want to keep it that way. That’s why you will end up scrolling through posts, tweets, and pictures and won’t run out of things to watch because they are an addiction.

The worst part is Facebook gives out free information but it is more likely false information, which is a big threat to you and other millions of users. Sad to say this but these social media apps use a business model to weaponize our own data against us. Disgusting!!!

This is a quote from William Gibson which might put things in perspective, “The future is already here—it’s just not very evenly distributed.”

If you need to understand this quote and the real meaning behind it, then watch the full episode Black Mirror’s Nosedive (Season 3 Episode 1). You will be amazed to see that this is actually happening more than we can imagine. In short, internet users are more worried and cautious about their online lives rather than who they actually are. You can see people flexing on Instagram and sharing insane videos on YouTube just to appear perfect even when they are not. People do this to get more followers and likes even though they have no moral pass. It is terrifying and we mean it.

Facebook is the real problem and they know it

You might hear the name “Cambridge Analytica” a lot when it comes to large scale abuse of personal data, but there are many more companies who are working on the same principle. Cambridge Analytica is just a scratch on the surface and we should highlight the source.

If you have spent a few weeks or even years using Facebook, then you will see multiple ads, suggestions to follow profiles, and a lot of paid posts. While some Facebook users have no problem watching ads or sharing personal information, the platform does not have proper rules to help users customize or completely block ads. Facebook has a lot of smooth ways to get your data, be it in the form of quiz games, surveys, notifications, or recommendations. The platform keeps asking you for more information so they can streamline microtargeting of users.

The question is… Should Facebook users ask for money in exchange for their private data? It seems like a plausible solution for some users. Facebook is earning money from advertisers to show you ads, so why not users ask for money before giving up their data? Food for thought.

However, the platform’s business model doesn’t work that way. That’s why every Facebook user must be aware of the dangers of the platform instead of accusing the privacy rules or Mark Zuckerberg, and they should shield themselves from illegal data mining. It’s just like blaming pizza and fries for your obesity when you know what the real problem is.

Dark patterns show up all over the web, nudging people to subscribe to newsletters, add items to their carts, or sign up for services.
Facebook and other social media platforms repeatedly use them to move you toward giving away more of your data. https://t.co/RT7diwmagA

Most of the private data contains user credentials and personal information. And the dark web is where cybercriminals can offer private information in exchange for money (I hope no hacker is reading this or I am next).

Have you seen those ads that offer an annual Netflix subscription for only $10? Some of these ads and their sources belong to the dark web. Picture this: hackers get ahold of unused Netflix accounts, steal credentials, and start selling them to people on the internet.

Let us share a not-so-fun fact about the reality of communication streams and online devices. Every platform without any proper security protocol or encryption is compromised in one way or another. Also, most internet users ignore common sense when browsing websites, clicking on ads, or using region-locked streaming services. As a result, the user loses his/her credentials and personal information to a stranger who can use it anyway he wants.

The blame is on both sides and not entirely on companies/websites for leaking passwords. You don’t log out from a website and expect the computer to keep your password safe? That’s lazy!

Word of advice: Use a password manager or a Virtual Private Network (VPN) to prevent cybercriminals from accessing your credentials.

Immediately following the Covid pandemic, remote workers and companies were the prime target for ransomware and malware attacks (they still are). This forced remote workers to enhance their security systems at home and use a secure connection.

Centrify said that up to 73% businesses started teaching their staff how to boost online security at home during working hours.

Have you heard of Basecamp? Even that highly respected project management system was at risk. Hackers used this platform to launch phishing attacks that steal your login credentials.

Phishing campaigns have started to use Basecamp: https://t.co/QEopz24lE1

You might think that cybersecurity companies are created for keeping our online data secure, but every internet user (we mean you) needs to watch their backs too and follow basic security guidelines. Don’t ignore common sense. Creating the same or weak passwords and clicking on shady email links might lead to data theft. This is where a VPN app comes to the rescue.

To make a long story short, if you are using no security protocols on your devices and using the same email on Instagram, Pinterest, Spotify, or Gmail, then boy you are in big trouble. Use the Twitter hashtag #NoPrivacyonFacebook if you are still reading.

DarkWebFacebookPrivacyMarkZuckerbergPureVengersweeklyroundup
Sameed Ajax Sameed is a Digital Content Producer at PureVPN who covers cybersecurity, streaming, and weekly news. Besides that, he wastes time playing FIFA, eating pizza, and sending tweets.