A Simple Hack: How to Watch NBC on Kodi Revealed!

Want to stream NBC on Kodi? Then this guide is for you. Get PureVPN to access the best Kodi add-ons and watch NBC from anywhere during the lockdown days. 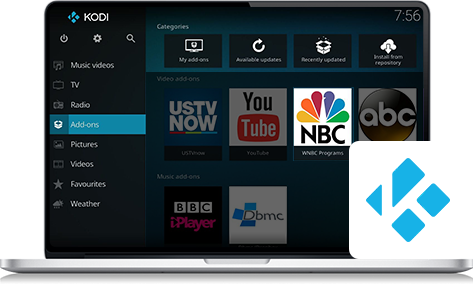 The need to consume new and interesting content has been there for centuries. In the past, people were almost addicted to reading newspapers in the morning, or a book in the evening. Later, people started tuning in to their radio sets and TVs for their favorite programs. The need is still there today, but how people consume content nowadays has innovated in totality.

Streaming is the new code of life for those who want to watch their favorite video content. Nowadays, there are unlimited options when it comes to deciding what to stream and on what device or platform.

There are plenty of streaming services such as Netflix, and Hulu, which have users in millions across the globe. Both of these streaming platforms provide access to some of the greatest TV shows and movies, but there are limited in scope. If you want to watch the news, some sports, or any other form of video content that you can’t categorize as entertainment, it difficult to find it on these streaming platforms.

One such example of a streaming service, which is absolutely free, is Kodi. It is an open source media player that provides you access to 0content from anywhere across the globe, even if it is blocked in your region. It brings everything you love, in one place, offering it in a neat and easy-on-the-eye user interface. Of course, it is supported and managed by a dedicated team of people.
Kodi can be installed on basically any device that connects to the internet and has a screen. It can be used on Linux, OSX, Windows, iOS, and Android, gaming consoles, set-top TV boxes and many other devices.

According to the traffic results shared by Kodi itself, 12 million users were active on Kodi as of December 2017. The company also shared that 1 out of 3 users regularly updated their add-on repositories to remain updated with the latest content.
Such a dedicated user base, despite all the crackdowns that Kodi has faced in the recent times, is only possible because Kodi provides a one-window solution to the best content in the world. The number of add-ons and the amount of content in each add-on is almost infinite, which explains why Kodi users remain extremely loyal to the service.
There is no right measure to categorize the genre of content that Kodi has. Let’s just say that it has everything and then some. Just get the right add-on and start streaming right away. There are, however, some categories available on Kodi that can be seen on the homepage. These categories take an aim to sort content on its homepage in this way:

Kodi is all about Add-ons

Just like apps are what make smartphones a viable product, for Kodi it is add-ons. For anything that you want to watch on Kodi, you need a relevant add-on. Once an add-on has been installed on your Kodi media player, it appears as a directory that you can select and explore to find content you can binge-watch.
For instance, if you want to watch the latest HBO TV shows on Kodi, you would need an add-on for HBO, or if you want to remain updated with current affairs and news, you could get something like a BBC or CNN add-on. There are thousands of add-ons available online for free download. Only a few premium ones are paid, but the content that they host can be found on other free Kodi add-ons too.

NBC is an American commercial broadcast network which has been around for more than 40 years. It works with more than 200 affiliates around the US, some of which broadcast in some parts of Canada and other US territories as well.

NBC is blocked outside the US – Geo-Restrictions!

NBC is only available in the US and some of its territories. Outside the US, you cannot access NBC due to geo-restrictions put in place by regional authorities, content producers, and streaming platforms. It is important to understand that there is no legal clause that allows content producers and moderators to censor content based on a user’s location. In fact, it is a violation of human rights.
According to a report published by the UN in 2011, access to the internet is declared as a basic human right in all the developing countries. This included the right to access content freely, which is no longer a possibility due to the unethical geo-restrictions put in place by the regional authorities.
You can Stream NBC on any device, Learn How to Watch NBC Live.

NBC is all about sports and news. It provides its viewers a diverse menu of all the live sports events as well as analysis and talk shows related to news and current affairs. It is a great place to stay updated with all the latest happenings around the world in all the industries such as tech, finance, sports.

What is NBC Gold

NBC Gold is a special pass for sports fans, which grants them exclusive passes to special live events that are hard to stream otherwise. Users interested in the NBC Gold pass can subscribe for a monthly fee of $49.99 for the most expensive plan that gives access to every match there is to watch. If you are interested in watching only a few of your favorites, take a look at the NBC Gold Pricing plans.

How to activate NBC Sports Gold on your device

Activating NBC Gold on any device is as simple as it can get. You just need to follow a few steps and you will be all prepared to start streaming. However, the setup asks for a few details, such as your internet provider, which you can randomly choose if you are outside the US.
The setup will also require you to enter a 6-digit authentication code, which you can get from your device that you want to activate. Just open the app, and go to the activation screen to get your activation code.
If you are ready for activating NBC Gold on your device click here.

Yes, there is an add-on for NBC that you can add on your Kodi media player. Users living in the US can just install the add-on and start streaming their favorite TV programs right away. However, since NBC is blocked for access from outside the US, people in other countries won’t be able to watch NBC on Kodi directly.
Expats, travelers, and users who live in other countries can use a VPN to change their location, which makes it possible to access NBC add-on and enjoy its content from Kodi. More on that later.

How to Install NBC Add-on and Watch NBC on Kodi

The first time you launch the NBC Sports Live Extra add-on, you will be provided an activation code that you will need to enter at https://activate.nbcsports.com/.
Alternatively, you can download the official NBCSN add-on from here and then set it up by clicking ‘Install from Zip File’ instead of ‘Install from repository’.

Dangers of Streaming on Unsecure Connection

According to a research conducted by cybersecurity analyst, Zubair Rafique, users who use free streaming platforms to watch content they love, such as sports and news, are at the highest risk of compromising their devices and data. He told BBC in an interview that free streaming platforms are usually an unattractive bet for reputed brands to place their ads, hence they have to turn toward the not-so-reputed brands.
Consequently, free streaming platforms are cluttered with all types of ads, such as popups, overlays, side banners, and every other place possible. These ads are designed in a way that they attract users to click on it. When clicked, they force users to install additional plugins or software for watching live streams.
According to the same research, the ads seen on the website were categorized into 3 categories, malware, scam, and adult content, based on where the ads lead to when users clicked on it. Following are the results:
As seen from the results, users who use free streaming platforms have a 54% chance of getting their devices infected with malware that can take remote control of their devices and data.
Once a malicious cyber criminal takes control of your device, they can remotely gain access to your devices microphone, camera and activity logs, which can transcribe each and everything you do online.

Always use a VPN for streaming

Only a VPN can keep you safe from all such menaces even if you continue to use free streaming platforms to suffice your entrainment needs. A VPN makes you completely anonymous online and allows you to access content that is otherwise blocked in your region.
It is important to know that not all VPNs are as good when it comes to keeping your privacy intact. While most of them will allow you to access blocked content, very few of them will actually keep you safe from the dangers of free content that come along. What you need is a good streaming VPN that cares about your privacy and digital identity.

Our VPN is the best VPN optimized for streaming. It has more than 6500+ servers placed across the globe in different countries, allowing users to experience true freedom and anonymity when streaming anything online. VPN allows for an absolutely hassle-free experience.
For streamers, the biggest hurdle is slow internet speeds, which can be due to their IP address getting blacklisted by their ISP. With VPN, streamers become completely invisible online, which allows them to evade the restrictions ISPs have placed on their IP, getting maximum streaming speeds in return.

How to get VPN on Kodi

Kodi is an open source media player, hence using it without taking ample safety measures is a bad idea. Integrating VPN on Kodi is simple. While there is no dedicated add-on for Kodi, you can patch VPN on your Wi-Fi router, which provides default security to all the devices that are connected to your router instantly.
Click here to get a detailed setup guide on How to get VPN on Kodi.

How to get VPN for any other device

Getting VPN for any device is very simple. Just follow the steps given below to get VPN and secure yourself online.