Well, we have news for you: You can stop searching for a new footy app or streaming service right now because the iPlayer offers everything for sports fans like you (and us).

Now you have a chance to stream live football on your TV, gaming console, or any other streaming device.

In this guide, we’ll uncover the full gamut of BBC iPlayer, which is a goldmine for sports fans.

BBC iPlayer is an English streaming service that offers a wide array of BBC-produced shows, documentaries, films, and live matches. For UK citizens, the iPlayer service is free; all you need is to create a new account to access everything.

There are some regions besides the United Kingdom where you can stream BBC iPlayer, but live sports is not available anywhere else except the UK. Mutters under breath: region-locked limitations are really annoying sometimes.

Which Sports are Available on iPlayer?

BBC iPlayer has licensing contracts to multiple sports, live fixtures, and flagship programs ranging from Today at Wimbledon, Test Match Special, or Match of the Day. If you like football (that is, US soccer), you might have heard of the can’t miss commentary from Gary Lineker, who has been hosting the Match of the Day for more than 20 years now. You’ll get your Lineker fix for sure.

And there’s more, you can even stream the FIFA World Cup and the UEFA European Championship.

Good news for you Arsenal fans: the London club loves celebrating and winning FA cup trophies. You can now watch football on TV and stream all FA Cup fixtures on iPlayer if you want to support your favorite club in all competitions.

Most importantly, you get to see all Premier League highlights with commentary. 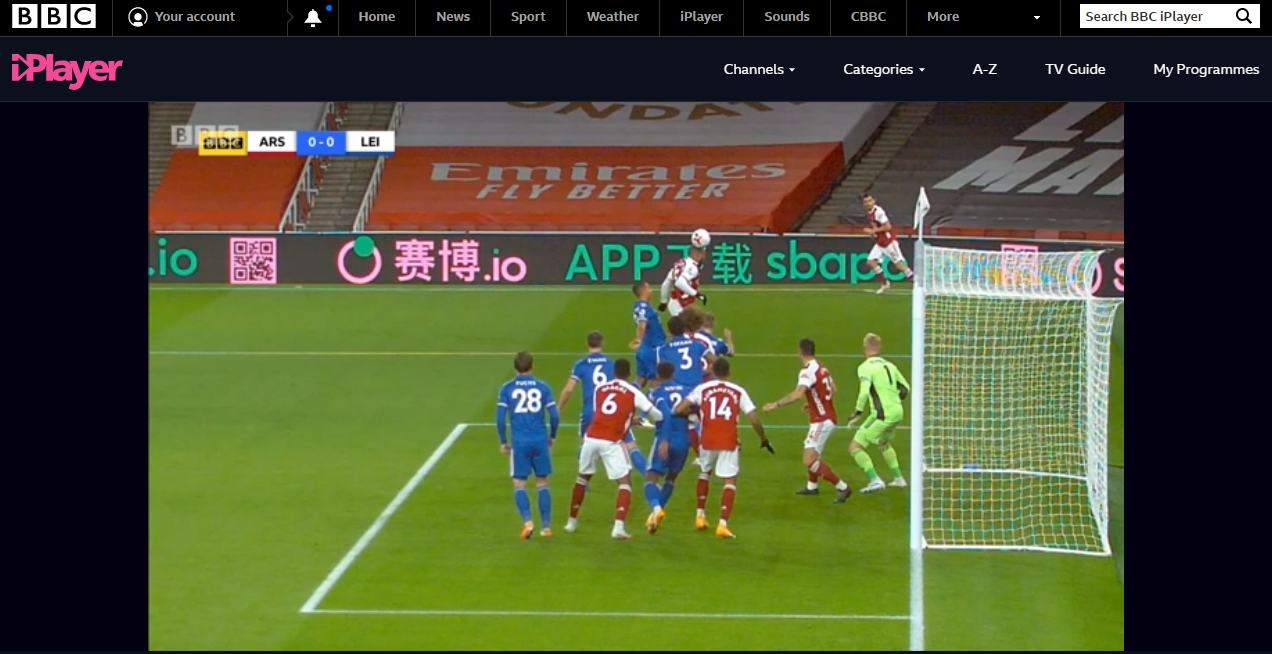 Formula 1: Thrilling Races between the Champs and Young Guns

Whether you are a tifosi (Ferrari fan), appreciate Red Bull drivers, or love Mercedes and watching Lewis Hamilton break records, you get to watch all circuit races live on iPlayer. We can’t tell you how satisfying it is to watch F1 cars competing against each other (but I guess you already know that because that’s why you’re here, right?). Don’t miss a chance to watch From Portugese Grand Prix to Tuscan GP, Russian GP, Turkish GP, Emilia GP, Bahrain GP, or Abu Dhabi GP.

If you like to see England hammer home another victory in a 5-day Test series or ODI, then iPlayer is your go-to platform. In-stadium attendees are still not allowed to book a seat and watch live cricket matches at the stadium. So, you can stream the whole match with full commentary on this free service.

Tennis: A Three-Horse Race but Anyways

What Else Is Worth Watching on the BBC iPlayer?

While some of us appreciate the sports value that BBC iPlayer has to offer, there’s a lot more where that comes from, and we’ll give you a taste below:

You can launch the streaming service to appreciate BBC shows like Fleabag, Luther, and Killing Eve, which comes highly recommended by the PureVengers, as well as Atlantis, Peaky Blinders, Top Gear, and for Tom Hardy fans, TabooAnd this isn’t the half of it; with BBC iPlayer, you get this and so much more. The content library is definitely eye-popping and jaw dropping, even if you frequently stream TV shows (and we are not exaggerating about anything). Moving on, you can also watch:

And guess what? You can stream all of these channels with a free BBC iPlayer subscription, which as we’ll outline below, is really easy to do no matter where you live. How about that?

As we have explained earlier, BBC iPlayer only works in the UK. If you’re anywhere else and want to access BBC iPlayer and all it has to offer, you’ll need to use a VPN app. With a VPN, you can access the iPlayer without any restrictions and will even be able to create a new user account on the iPlayer service regardless of your current geographic location.

Here’s how it works: 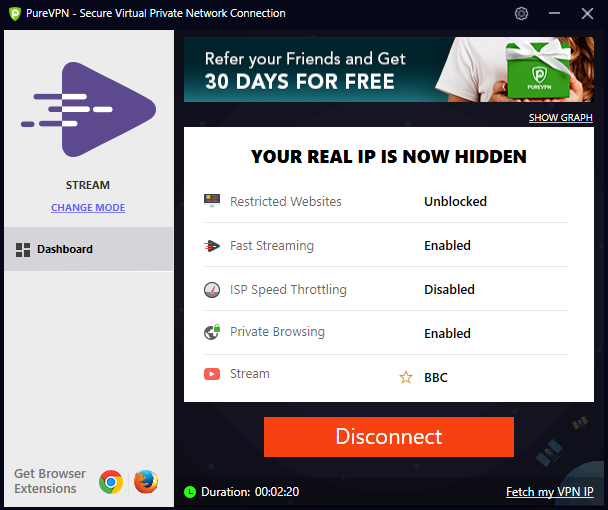 In addition to being able to unlock the iPlayer, a VPN app can be used to unlock Sky, BT Sports, Disney+, Hulu, HBO Max, Tubi TV (free), or Crackle (free) from a country where these streaming services are known to be restricted. This is why a VPN is awesome and can be a reliable tool in the long run. You might never know which streaming service is going to be launched in the future and you’ll need a VPN app to unlock it elsewhere.

The default language is obviously English because it caters to a UK audience, but you can change the settings to Irish, Gaelic, Scottish, or Welsh. And, the best part is Gary Lineker’s commentary in English, which is a treat of its own (football fans will understand this).

Is the BBC iPlayer free to watch?

Yes, BBC iPlayer is free if you are living in the United Kingdom. BBC iPlayer doesn’t work anywhere else because of region-locked issues and licensing rights. But when you are successfully able to access BBC iPlayer through a non-UK location with the help of a VPN, if you see a prompt message asking you about the UK TV license, just click “OK” and continue to search the library.

To download BBC iPlayer, you can either stream iPlayer online or install the mobile app from the iOS or Google Play Store. If you are using an iOS device like iPhone, iPad, or Apple TV, then you can find a BBC iPlayer app from the App store. The same process goes for Android or Blackberry users (yes, the app is even available for the BB users among us).

How many subscribers does BBC iPlayer have?

The iPlayer does not specify how many subscribers it has because you are required to have a UK TV license, and as such, they have nothing they’re really seemingly bragging about, especially as a TV license is not a subscription that you can buy online.

Kick it Hard on the iPlayer Today...

Buy VPN to Get A Better and Secure Internet Experience

All amounts shown are in USD

Pay with your credit card and GET AN EXTRA 10% OFF!

Your Payment is declined