Netflix holds a firm ground in the OTT streaming industry with a whopping 139+ million subscribers but by no means, it holds any monopoly. There are a number of other streaming services that would do an equally good job at satisfying your streaming needs. Down below we have shared an exclusive list of Netflix alternatives (both free and paid) that are worth your attention in 2019.

Netflix needs no introduction in the streaming industry. The US based streaming service so popular that the name is quite literally used as a verb. ‘Let’s Netflix Tonight’, ‘Time for Some Netflix and Chill’, are just a few examples of how ‘Netflix’ has replaced the word ‘streaming’ in users’ minds. However, the online streaming landscape seems to be changing as new contenders have chimed in, giving Netflix some serious competition.
So if you’re running low on pocket money, looking for a change in media catalog or simply need a break from Netflix, try these Netflix alternatives.

Amazon Prime Video is another key player in the OTT streaming industry. Available in 100+ countries, the service costs around $8.99 per month or $99 for a year. It offers great value for money as it comes bundled up with many Prime subscriptions offered by Amazon.
While Amazon offers a comparatively smaller media catalog than Netflix, you’d barely hear Amazon users complaining. Following in the footsteps of Netflix, Amazon Prime Video also offers original production including famous TV shows like Amertican Gods, and Man in the High Castle. Another notable feature is that Amazon Prime video lets you get comparatively cheaper access to other media streaming sites like HBO and Showtime in the form of add-ons.

Hailing from the US, Hulu is the closest competitor to Netflix in the region offering thousands of movies and TV shows from leading networks like AMC, PBS, 21st Century Fox etc. However, Hulu lags behind Netflix in popularity because the service is limited to the US only while Netflix is available in almost every other country of the world. Although it is not recommended, but users may also opt for a reliable Hulu VPN to access the service outside U.S.
Just like Netflix and Amazon Prime Video, Hulu also offers its collection of original programs including critically acclaimed TV shows like The Handmaid’s Tale and The Act. The service costs $8 per month but you may also get access to other streaming services like HBO Cinemax and Showtime for a few extra bucks. Something that Netflix would never let you be able to do.
There’s another area in Hulu easily beats Netflix. It also offers streaming of Live TV channels and Cloud DVR Support so in case you want to ditch your good ol’ TV subscription, Hulu is the way to go. 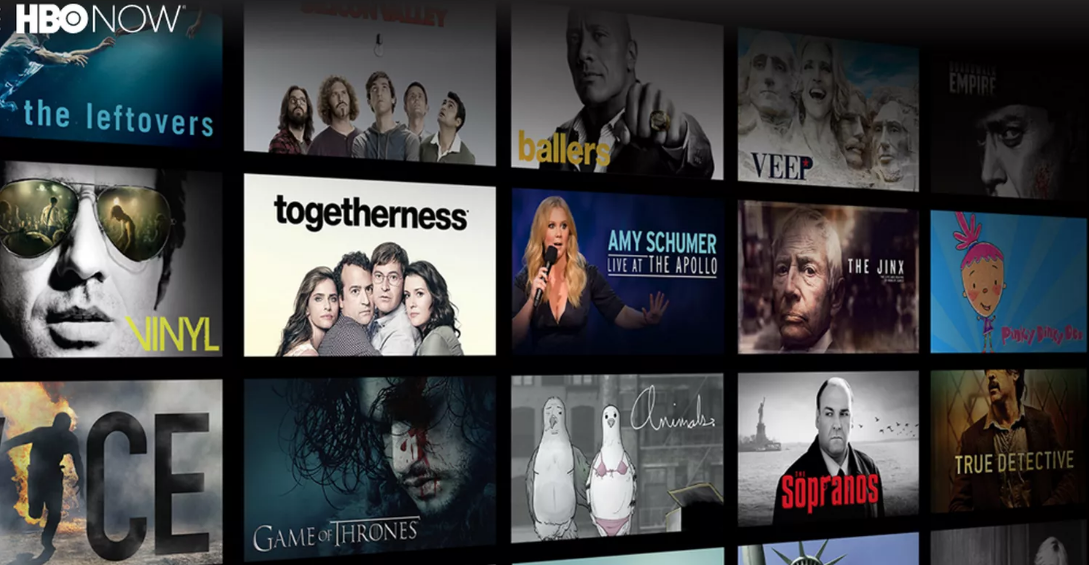 HBO has produced some of the entertainment industry’s finest TV shows but they’re really hard to catch on the cable TV channel while being aired. So if you want to binge watch popular HBO shows like ‘Game of Thrones’ and ‘Westworld’ as per convenience, subscribe to HBO Now.
As tempting as it may sound, HBO Now comes with a heavy price tag of $14.99 per month for good reasons. It gives a one click access to all of HBO’s movies, TV shows, documentaries, sports streams and what not. Moreover, you can stream the service simultaneously on unlimited number of supported devices.
Users may also opt for HBO Go which comes with the default HBO cable subscription. It offers everything that HBO Now offers but you still have to pay for the cable TV subscription.

Available in the US only, Sling TV is a cable streaming service established in 2015. It allows users to stream all the TV channels that are traditionally available on a cable network without a DISH subscription or contract. At a comparatively lower price of $25, Sling TV also saves you the cost of high-priced devices/equipments, consuming space under your TV device. Moreover, the service enables you to cherry pick five or six more channels for an extra $4.99. You may also spend a little extra to get access to premium channels like HBO, STARZ, and EPIX.
Just like Netflix or Hulu, Sling TV is an internet-enabled media streaming service and you can watch it on any supported device like Roku, Xbox, Android TVs, Chromecast etc. 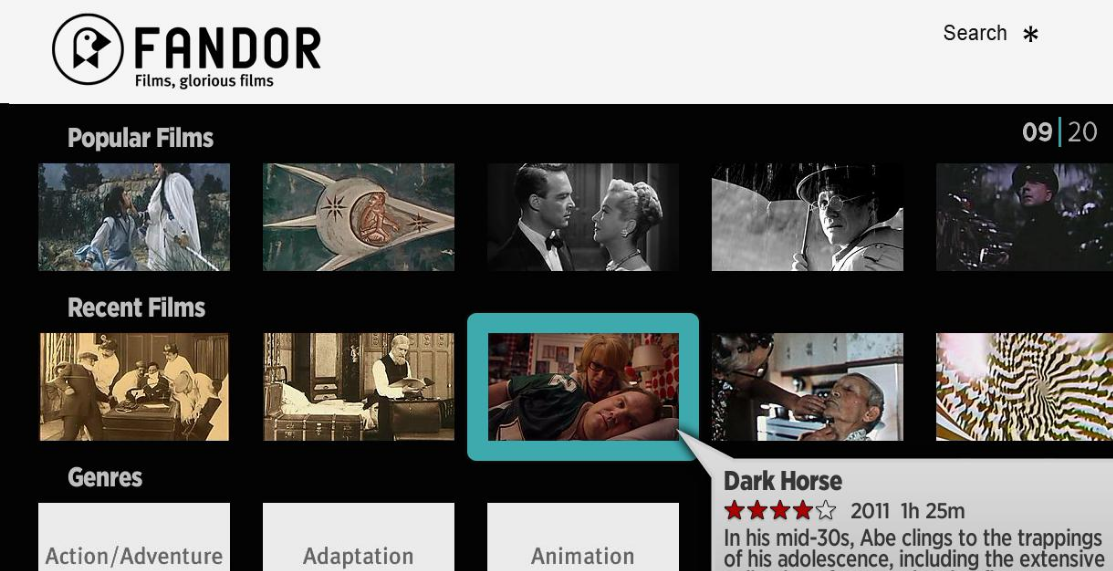 Fandor is lesser known streaming service but it offers video content that you’d never on any other site. Often referred to as the ‘Soundcloud’ of video streaming, it features a plethora of movies, TV shows, and documentaries that are independently produced. Fandor may not be a good option for those who fancy mainstream Hollywood movies but if you’re into the indie movie scene, Fandor is your best bet.
The service currently hosts a huge media library of 6000+ movies along with a simple-to-use interface for convenient searching. Fandor costs around $10 per month but if you’re not sure if it’s worth your streaming spend, you may opt for a free 14-day trial first

If you want to save yourself from the streaming cost altogether, you may resort to some of these free Netflix alternatives. Although their offerings are not even close to any of the paid ones, they’re still pretty awesome to use since you don’t have to pay a dime.

Owned by Sony, Crackle is a FREE media streaming service that offers a wide collection of movies, TV shows (new and old) on a rotating basis. It means that all content is available temporarily and you won’t get to choose what you want to watch.
Crackle also has its own collection of original content. It requires no sign up, the streaming experience is quite good and there’s no significant difference in the video quality compared to paid alternatives like Amazon Prime. However, the ads may get annoying at times, but it’s nothing we can complain about from a free service. Another possible advantage is that Crackle is regionally limited to the US only but there are workarounds that users may apply

Snag Films is yet another great free Netflix alternative for streaming. It boasts a huge media library of 10000+ movies and TV shows which, needless to say, isn’t as updated as any of the paid Netflix alternatives discussed above.
Considering the fact that it’s a free streaming service, users wouldn’t mind the relatively low video quality of 720p or even lower for old movies and TV shows. Some content is available in 1020p high definition quality but it's mostly a hit or miss.The ads placement isn’t too intrusive and sometimes users may not see any ads at all.

Popcorn flix has a variety of free movies and TV shows from all genres that are ready to stream without even having to sign up for an account. The website interface is easy to navigate and makes it very easy to access video content from different genres such as comedy, action, drama, family, foreign films, stand up comedy, documentaries, and more.
A downside is that video quality isn’t that great, and offers almost the same quality as a DVD print. The advertisements aren’t too invasive but the video player doesn’t have any options other than volume control. Unlike Sony Crakcle’s media player which offers subtitles too.
The selection of films is a bit hit and miss too, with many older and lesser known titles instead. It’s easy to browse through the genres though, so it’s always worth checking to see what’s there. With movies at least, we often struggled to get the TV shows to play.
Even with all that considered, it’s hard to grumble at free, and if you’ve exhausted all your paid for streaming services and still come out with nothing to watch, it could be worth checking Snag’s catalogue. You might just find a hidden gem.