Football is one of the most popular sports in the world, with the FIFA World Cup being its most prestigious event.

Even though the FIFA World Cup is a global event, many fans will face hurdles in watching it either because broadcasters in their country don’t have rights to show the World Cup, or because they’re unable to access their usual streams while on a vacation.

Fortunately, there’s a simple solution to this problem by which you can watch the Qatar world cup 2022 no matter where you are in the world. This guide gives you complete information about the channels live streaming FIFA World Cup matches.

Over 120 streaming channels worldwide are streaming every exciting minute of FIFA live in multiple languages. Here’s the list of TV channels that you can check out to stream all the exciting matches live.

The final round of ticket sales for the FIFA World Cup Qatar 2022 kicked off on Tuesday. Ticket sales started on Tuesday at noon and will continue till all tickets are sold, according to organizers. FIFA said that a total of 3,010,679 tickets would be available, including the last-minute phase.

How to Watch FIFA World Cup Online Live From Anywhere
A virtual private network is a simple and helpful tool to access streaming channels and websites that are not available in your country or region.

Step 3: Connect to your desired country server. For example, to stream with BBC iPlayer, choose the UK Server.

How to Watch FIFA World Cup without Cable

If you are not a fan of the TV at all or having issues getting a cable subscription, you can live stream the FIFA World Cup on your desktop, laptop, smartphone, or tablet by logging into the streaming service of your choice like Fubo TV, Youtube TV, Sling, Hulu, etc.

How to Stream FIFA World Cup Live in the US

There is no place on earth where you can’t find a FIFA fan club. Likewise, the US is no exception. However, the official broadcaster of FIFA in the US is Fox Sports, which airs the event in the English language, whereas the other broadcaster, Telemundo, provides Spanish transmission. Both these channels are available on cable. So soccer fans who would like to watch online in any language can get benefit from the above-mentioned list to access the football world cup live in the USA on any channel.

It can be a bummer for ex-pats living in the US who want to live stream the FIFA world cup in their native language. Luckily, with a Virtual private network, ex-pats in the US can finally like FIFA in their native language by connecting to the location of their choice and accessing their desired native broadcasting channel. For example, if a person wants to watch German commentary, he may connect to a German country server via a virtual private network and access the free channels ARD or ZDF while in the USA.

How to Watch FIFA World Cup Live in the UK

The same is true when it comes to football fans living as an ex-pat in the UK. The official broadcasters offering live streams of the world cup championship in the UK are BBC and ITV.

Expats who don’t want to spoil the quadrennial championship by enjoying the event in their native language can use a virtual private network as it is the best option to go for.

How to Watch FIFA World Cup Live in Canada

How to Watch FIFA World Cup Live in Australia

How to Watch FIFA World Cup Online on Different Devices

Do you know what makes PureVPN ideal for FIFA live stream? It is its multi-device compatibility!

What does this mean? Well, you can finally access the FIFA world cup on any device of your choice for added convenience and the fastest streaming speed.

How to Watch FIFA World Cup Live on Kodi

How to Watch FIFA World Cup on Amazon Firestick

How to Live Stream FIFA World Cup on PS4

How to Watch FIFA Online on Apple TV

How to Watch FIFA Live on Android Apps

See our Support Guides to  set up PureVPN on different routers

The FIFA World Cup 2022 will be hosted by Qatar in the Middle East. All of the matches will be held at eight venues located within or around Doha. These include:

There you go! You now have the complete guide to watch the FIFA world cup online. So, don’t worry about accessing your desired streaming service from anywhere you want and in any language. Just install VPN and get ready to live stream FIFA online.

When is the next Men’s FIFA World Cup?

Qatar is scheduled to host FIFA World Cup 2022. It will be the first World Cup held in the Middle East and just the second to be staged in Asia.

Can I use a free VPN to live stream the FIFA World Cup?

It is not recommended. To begin with, free VPNs are often slow and have bandwidth limitations, making them unsuitable for live streaming and other data-intensive tasks. Furthermore, these services typically have small networks and may not even offer servers in the locations you want. Malware and dubious logging policies are some other reasons why you should avoid free VPNs.

Where can I stream the FIFA World Cup Qatar 2022?

If you take a look at our table above, you will see that different channels will cover the FIFA World Cup 2022 in different countries. For instance, BBC and ITV are going to show the tournament in the UK, while MatchTV and Channel One are the official broadcasters in Russia. 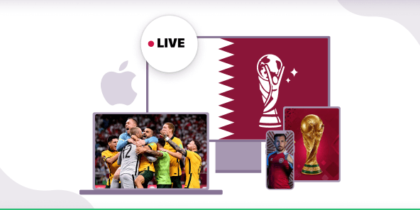 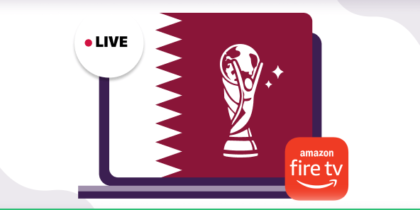 How To Watch FIFA World Cup On Amazon Firestick