How to Watch HBO in the UK

HBO is a very popular streaming service with a global fan base despite the fact that it is only available for access in the United States. If you live in the United Kingdom, you can instantly access HBO on any streaming device just by connecting to PureVPN for just $0.99. Read on to learn how to watch HBO in the UK?: 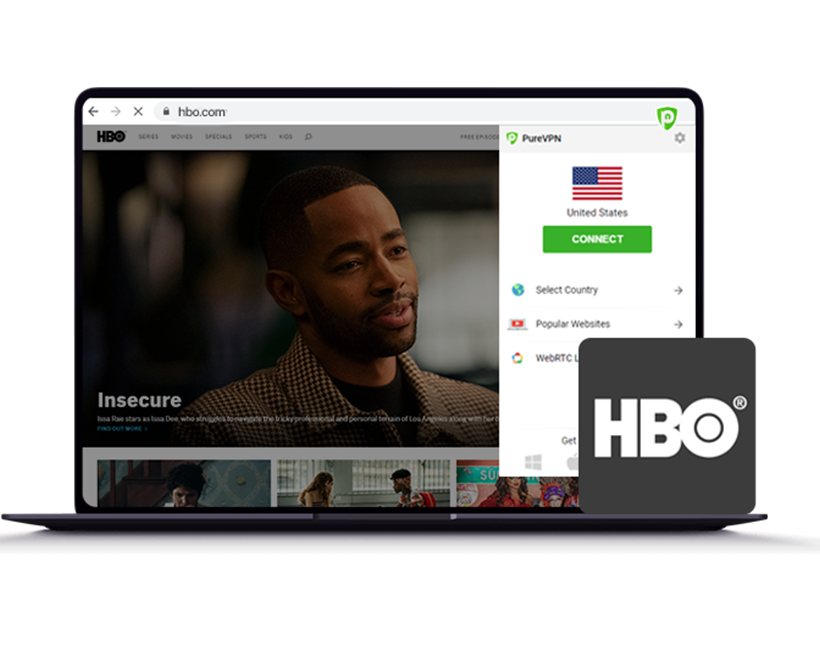 We are living in a great era where every person has access to multiple streaming channels and can become a cord-cutter at any time. To that end, HBO has capitalized on this, and has redefined the video-on-demand industry over the decades.

Sadly, things were great only until the 2000s. Although HBO is popular around the world to this day, you might have noticed that many titles are not available in the UK. This is due to regional limitations and there is a way around it.

HBO does not work outside the US because of licensing contracts and content rights agreements. But don’t ever think that your HBO subscription is worthless as soon as you step out of the US! There is a quick solution to all the problems related to regional limitations and restrictions.

Get a VPN connection on your device and use an American IP address instead. In this way, you can convince the HBO service that you are residing in the United States, even though you are physically located somewhere in the United Kingdom. Using a VPN is a safe and legal choice that protects you online from all cyber threats.
Here’s how:

There you go! You can watch all HBO TV series and movies in the UK without any limitations. HBO is home to pure entertainment as it hosts shows such as Game of Thrones, Westworld, and The Wire.

Alternatives for Watching HBO in the UK

How Do I Watch HBO on Sky Atlantic?

Sky has exclusive rights for airing HBO series and movies in the UK. You can also watch popular HBO shows on Sky Atlantic such as Breaking Bad, Better Call Saul, Westworld, and Game of Thrones. Plus, you can access titles from Showtime and AMC as well as Sky originals.

The downside is you have to pay an extra $20 per month to get Sky Atlantic because the service offers premium content. You can’t add Sky to your cable TV package easily. Alternatively, you can get Now TV for $8.99 per month which is much cheaper than Sky Atlantic.

But there is a catch! You may not be able to access the entire HBO catalog on Now TV every time. In simpler words, if you watched the first few seasons of Game of Thrones on Now TV then they might disappear in the next month. Now TV is cheap but not a reliable platform to watch HBO.

How to Watch HBO in the UK on Amazon Prime

Another option for you, as a UK citizen, is to get Amazon Prime Video Channel. But the service can be a tiny bit expensive for you. Amazon Prime Video costs $14.99 per month and allows you to watch HBO on Amazon prime anytime you want. However, you can’t access US channels if you are outside the states, even with an Amazon Prime subscription at your disposal.

How to Watch HBO in the UK on Hulu

If you have a working Hulu subscription, you can use it to access HBO in the UK. When signing in to HBO on your streaming device, choose the option for signing in via TV provider, select Hulu and give your credentials. To make this work, you need a premium streaming VPN as Hulu is only available in the US watch HBO on Hulu .

Subscription Plans for HBO in the UK:

Every great streaming channel has a price! HBO has premium content and exclusives so you have to spend some money on the service. Although you can’t access HBO in the UK without a VPN, the subscription plans remain the same throughout.

HBO Max will cost you $14.99 per month when you subscribe through the iOS or Google Play Store. However, you the streaming service is only available in the US. Alternatively, you can use the same subscription to access HBO Max on your PC or smart TV.

For any plan that you opt for, you have to use a VPN to become an HBO subscriber and access all content in the UK.

Other Great Stuff To Watch On HBO in the UK

HBO’s content library is full of binge-worthy shows and block buster movies. If you want a consistent fix for your favorite video-on-demand content, HBO is a great service to opt for. Every month, HBO adds and removes many titles from its content library based on what’s new and what’s trending. To help you stay updated with all that’s new, here is all that HBO added to its content library this month:

We love new shows! As entertainment geeks, we search for series and waste our weekend binge-watching great content. If you are like us, you would enjoy watching content on HBO.

There are many restrictions on Amazon Prime and Sky Atlantic, which is why you need a VPN. Once you connect to a VPN, you don’t have to worry about regional limitations and can watch HBO anywhere in the world. With a VPN, you can also unlock region specific content on streaming services such as BBC iPlayer , Netflix libraries, Hulu , or Disney+ .

This is an understatement when we say you are missing out on great content by not having HBO. Now you can watch HBO series in the United Kingdom without any limitations. If you need help in getting started with a VPN, then contact us via the Live Chat option.