Cheapest Way to Get Disney Plus in 2022

Disney+ may not be available in every country but you can still get access to all titles and TV shows with PureVPN on your device. All you have to do is change your IP address and virtually transport to Malaysia to enjoy a cheaper Disney+ subscription. 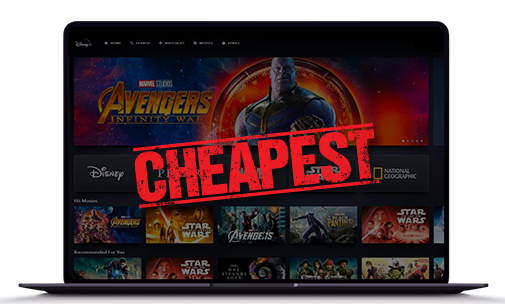 Considering how Disney+ has the best shows and movies from Marvel and Star Wars, it is easily one of the best streaming services on the market. However, the price you pay for Disney+ depends entirely on your country.

What does that mean? That’s right, there is probably a cheapest way to get Disney+ online. So, here’s how you would get the cheapest Disney+ subscription online:

How Much Does Disney+ Cost in Every Country?

If you’re interested in getting the cheapest Disney+ account online, it might help to see exactly how much does the streaming service cost online. Here’s a comparison of Disney+ prices from around the world:

Before you buy a Disney+ subscription, take a look at a discounted bundle subscription first. If you are living in the US then you can enjoy a bundle package that includes Disney+ with Hulu and ESPN. All you have to do is pay $12.99 every month to get access to three popular streaming websites.

This means you can watch 5,700 TV episodes and 500 movies on Disney Plus combined with 1,500 TV shows and 2,500 movies on Hulu. On top of that, you are getting ESPN to watch UFC matches, golf, tennis, and other catch-up sports shows.

Step-by-Step Guide: The Cheapest Way to Get Disney Plus in 2021

Which is the Cheaper One?

Now that you know how to get the cheapest Disney+ subscription anywhere in the world, you might wonder, “Is there any other streaming service that’s even cheaper than Disney+?” Well, in that case, here’s a comparison of the cheapest Disney+ subscription and almost all other major streaming services to help you decide which service you should sing up for:

This is arguably the most important comparison considering how Netflix remains the best streaming service on the market. Since the cheapest Netflix subscription you can get is from Argentina, here’s a price comparison for both:

HBO Max is one of the most promising streaming services on the market right now. Considering it has almost all movies released under the Warner Bros. banner, you can be sure you’ll never be short of great movies or shows to watch. Here’s a comparison of the cheapest Disney+ and HBO Max libraries:

Disney Plus vs Amazon Prime Video

Amazon Prime is unarguably one of the most convenient streaming services online, since you can access it seamlessly from the main Amazon site. While it didn’t have such a huge catalog of content at start, it has since made up a lot of ground by adding several shows, movies, and originals to its library. Moreover, it doesn’t cost that much either. Here’s a comparison of it with the cheapest Disney+ plan online:

Disney Plus vs Hulu

What’s the cheapest way to buy Disney+ for my TV?

The United States offers the cheapest Disney+ deal at only $6.99 per month. But if you follow our guide above, you can get a Disney+ premium deal at $1.66 per month which makes $20 every year.

Can I get Disney Plus using a gift code?

If you have a Disney+ code then follow the steps below:

What are some common Disney+ deals?

The most common Disney+ deal costs around $6.99 per month. If you choose the Disney+ bundle then you have to pay $12.99 to get Disney Plus with Hulu and ESPN.

After reading this guide, we hope you can easily understand the cheapest way to watch Disney Plus from anywhere in the world. You can follow our guide to watch Disney+ shows and movies at a discount even if Disney+ is not available in your country. Want more help? Then send us a message using the live chat option.