The Best VRChat Rooms That You Can Explore Right Now

COVID-19 has forced us to reconsider our position on several aspects of our daily lives. With a lockdown still in place, people are constantly looking for new and engaging ways to keep themselves occupied and entertained. As a result, one such activity that has gained popularity is VRChat rooms.

A VRChat room is not a new novelty. VRChat rooms have been around for a while but have always been mired by fears about privacy and safety. After all, most users are completely exposed online without a proper VRChat VPN, making them ideal targets for potential hackers.

However, users have now designed VRChat rooms that they claim should be free of any such threats. Furthermore, while fictional, all of these locations bring some truly unique and immersive to the table. Most of these rooms also provide a detailed guide on how to make VRChat avatars to maximize their experiences.

So, here are some VRChat rooms that should be at the top of your VRChat download list:

There’s a simple reason why this is none of the most highly visited VR maps online. The design is minimalistic and meant to capture what a quiet day at one of Japan’s iconic shrines would look like.

It doesn’t matter when you decide to go online, chances are you’ll be accompanied by several other users on this VRChat. It has all the elements to give you the feeling of being physically present there with subtleties such as nooks and crannies. 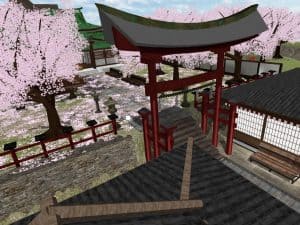 Despite being designed by one user, the whole immersive VRChat experience will surely leave most users in awe. All the buildings in the scene are interactive, meaning that you can enter any of the pagoda-topped shrines and enjoy the interiors of these buildings just the same.

Home of the Time (By fr1ed)

If you’ve wondered what it would be like to be by yourself on a secluded island with all your favorite items with you, then this is the VRChat for you. The design is fairly simple and nothing out of the ordinary. What sets it apart from the others on this list is the serenity-aspect. You’ll be on an island that has an automated day/night schedule as well as a room for you to hang around in. 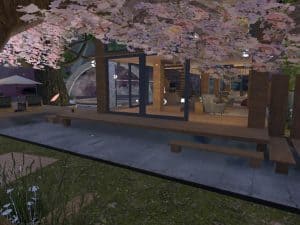 Outside of the room, there is a garden, some statues, a patio, as well as some other greenery. Simple, but impressively elegant.

The Black Cat (By spookyghostb)

The creator of this VRChat room considers it one of the first virtual “bars” online. And honestly, that would be the best way of describing it. The interior, lighting, and the environment, as well as the arrangement, reflects that décor. 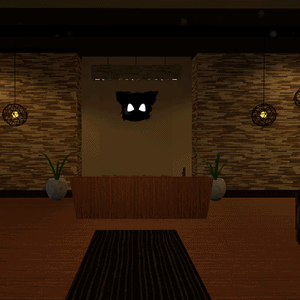 As you’d expect, you can meet other people in this VRChat room as well. The environment gives the place its unique feeling and helps you find other people like you would in a regular bar. With the current health epidemic making it uncertain when regular bars will reopen, this could be an option you should check out.

Picture Blade Runner’s cinematography in your personal space. LOLI’s created this VRChat space with that particular image in mind. However, don’t be fooled by the name alone. The room stands out as a place where users can decompress and unwind. The iconic neon blue hue fills the interior while there are other objects you can interact with as well. 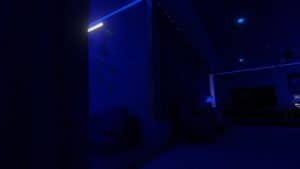 These other objects include a chessboard, a dart set, as well as a poker table. While not specifically designed for crowds, it’s the perfect place for you to hang out with a few friends and enjoy a nice quiet evening…even if it’s still in a VRChat room.

Initially, it was just a little side project of Sombie’s. But it quickly turned into something Sombie started to pay a lot of attention to. Sombie’s Hangout consists of three distinct floors. Each of these floors has an interior and exterior design of its own. The first floor can be best described as an old-fashioned wooden room paying homage to the salons from indie-western movies. 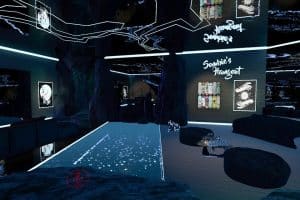 The second floor is an art-deco design. It is something that would be most appealing to someone that yearns for the 60s art-style and atmosphere. Finally, the third floor is supposed to be the futuristic art deco. Apart from the style and inspiration in terms of décor, everything else is almost identical.

Users have the choice to play virtual chess as well as virtual beer pong. If you’re someone that enjoys a nice mystery then it also has an underground tunnel with several passageways. This would be the perfect VRChat download if you feel bored and consistently want something new to do with your VRChat avatars online.

The Great Pug (By owlboy)

The Great Pug is meant to be a “trip down memory lane”. That being said, the VRChat room certainly comes good on its promise as it creates an environment that will make you reminisce about the 90s and the early 2000s.

It’s hard to pinpoint exactly how this room does this but that feeling of nostalgia instantly hits you once you enter it. Some things you’ll notice are the thick TVs, desktop computers that will show you MSN screens, and Napster pages. 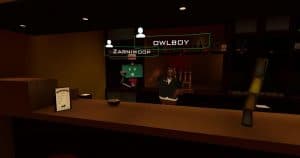 Similarly, you can download other environments too based on different periods going as far back as the 1800s. The highest-rated addition is the 70s pack that lets you see how life was like in a suburban American neighborhood in that era.

Void Club is a bit different from all other VRChat rooms in this list. For starters, this one is by far the busiest. Initially, it didn’t enjoy as many users because, why would anyone want to go to a digital bar when you could just go to an actual one? However, the recent lockdown has resulted in this VRChat to skyrocket in terms of active VRChat avatars and users. 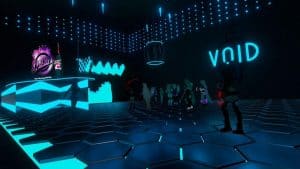 Absolute privacy can be hard to maintain on some of these VRChat rooms. Your VRChat avatar might just be an extension of your digital self but there’s no point in leaving yourself vulnerable online. Hence, I would strongly recommend that you use a reliable VRChat VPN like PureVPN to ensure complete privacy for yourself online.

how to make vrchat avatarsvrchatvrchat avatarsvrchat downloadvrchat vpn
Yasir Nawaz Yasir enjoys reading and writing about the latest developments in the world of AI and cybersecurity. A firm believer in the right to digital privacy for all, he shares his thoughts on issues both controversial and menial. His other interests include chess, reading, and looking to the horizon in his best Luke Skywalker impression.