Another day, another new low for the social media giant. Facebook recently disclosed a nasty bug in its Photo API that gave app developers unauthorized access to the private photos of up to 6.8 million users.

The bug, which ran from Sept 13 to Sept 25, affected pictures uploaded to Facebook Stories, Marketplace, as well as those that were uploaded but never publicly shared. Along with issuing an apology, Facebook said that it will roll out tools for app developers to determine whether they were impacted, and will work with them to delete the photos.

The company also plans to notify users whose photos might have been exposed via Notification, which will direct them to Facebook’s Help Center to see if they used any third-party apps that succumbed to the bug.

Here’s an example of the user notification you may see: 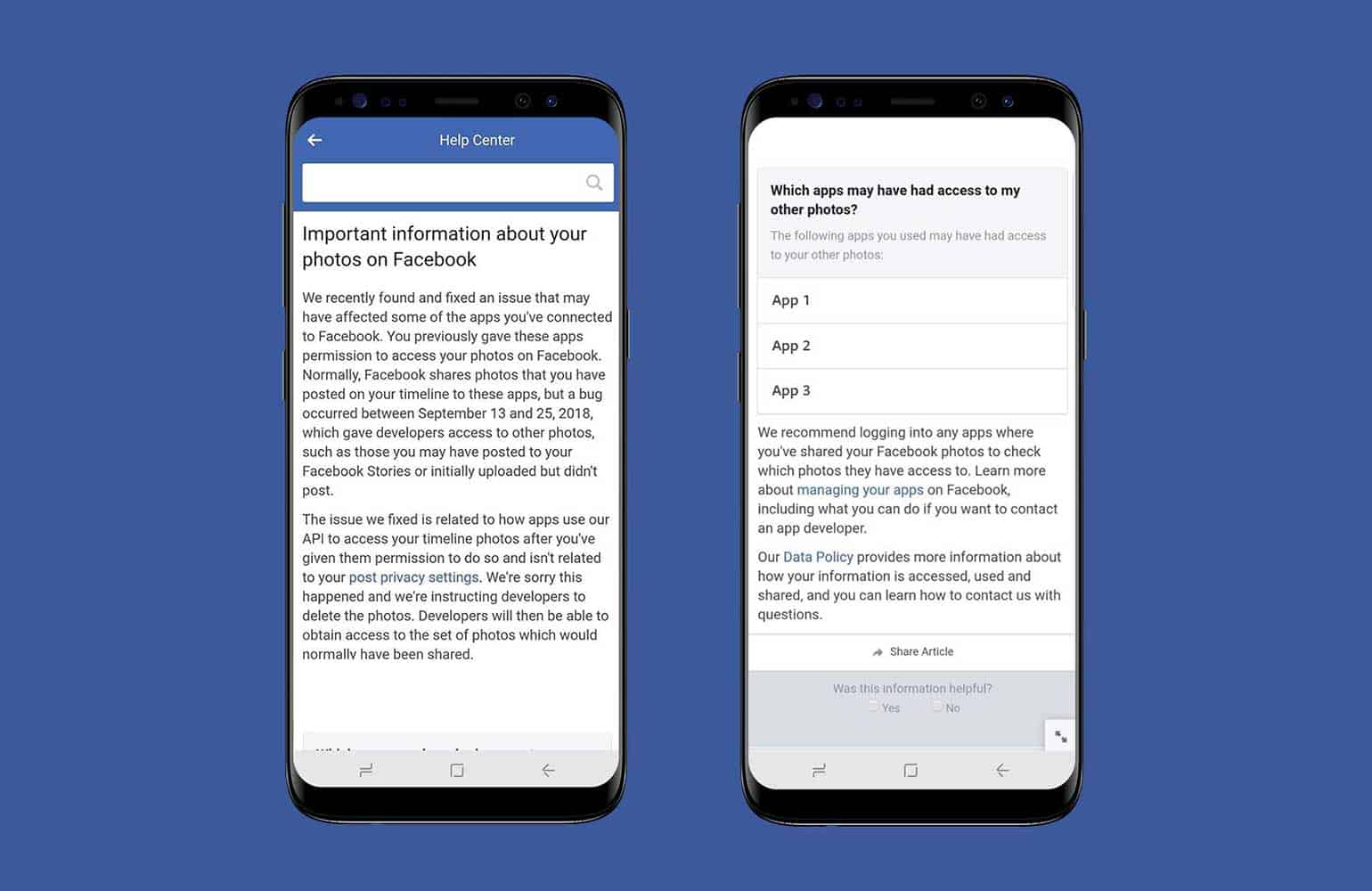 Over the past two years, Facebook has been in the headlines for one too many privacy scandals. The personal data of up to 87 million users was harvested in what was called the Facebook-Cambridge Analytica data scandal. Then just a few months ago, around 50 million users had their Facebook accounts skimmed by hackers.

According to Facebook, photos privately sent through Messenger weren’t impacted by the bug. It also didn’t expose any photos users didn’t upload to Facebook from their computer or camera roll. The privacy breach, nonetheless, will further deteriorate consumer confidence in Facebook as a responsible steward of their private information.

That Facebook keeps photos you uploaded but never shared is strange, but the fact they could be accessed by app developers is unacceptable on all counts. The company’s failings are not only souring users, but also employees and the tech industry in general. Honestly, it increasingly seems as if Facebook has grown too large for the company to effectively secure.

Believed to be the largest-ever security incident in the history of Facebook, the breach involved attackers stealing “access tokens”, a security key of sorts that enables Facebook users to remain logged into their account without having to enter their credentials very time.

If an attacker possesses a token not only does it give them complete control over the account of the unsuspecting victim, but also allows them to log into third-party app sites and apps that use Facebook login.

The incident comes at a worse time for the social media giant. After all, it has already been facing increasing criticism over hate speech, foreign interference in US elections, spreading of misinformation, and of course, the Cambridge Analytica data scandal.

The attackers exploited three flaws in Facebook’s “View As” feature, according to Facebook. Basically, it allows users to view what their profile looks like to other people. The company doesn’t yet know when the breach took place, but it stated that investigations began after unusual activity was discovered on September 16.

Besides the 50 million compromised accounts, Facebook said 40 million additional accounts would be required to log out of their Facebook accounts as a precautionary step. This would reset the access tokens of those users and protect their accounts.

The social media company has notified law enforcement, and is working with the Federal Bureau of Investigation (FBI), according to Guy Rosen, the vice-president of product management. However, the identity and origin of the attackers  remains unknown as the investigation is still in its initial stages.

It’s looking like Facebook and PR disasters go hand-in-hand.  The publication of a report highlighting a leaked “growth at any cost” memo from one of Facebook’s top executives, Andrew Bosworth, – which was originally circulated in 2016 –  has sparked an emotional outrage among employees at the company.

The internal posts of Facebook employees talking about today’s leaked memo, as those collected by the Verge, indicate an increasing sense of disappointment and frustration within the company, especially with regards to leaked information.

While Boz’s intentions were only to motivate his troops, the truth of his words is terrifyingly ugly for users of the social media giant:

“We connect people. Period. That’s why all the work we do in growth is justified. All the questionable contact importing practices. All the subtle language that helps people stay searchable by friends. All of the work we do to bring more communication in. The work we will likely have to do in China some day. All of it,”

“So we connect more people, that can be bad if they make it negative. Maybe it costs someone a life by exposing someone to bullies.

“Maybe someone dies in a terrorist attack coordinated on our tools.”

My statement on the recent Buzzfeed story containing a post I wrote in 2016 pic.twitter.com/lmzDMcrjv5

While many employees flocked to Bosworth’s side and commended him for sharing his views on company matters, others criticized him for removing the post and felt that it promoted a negative narrative about the company.

The advent of social media has made it possible to reach people with common likes and interests globally. When we log use the social media giant, Facebook, we can connect to the world at the click of a button or a tap of the finger.

We get to meet new people, engage in friendly conversations with them, and get to learn more about culture, ethics, and perspectives of different people from other parts of the world. We also get to participate in discussions to convey our thoughts or expressions on topics we relate to or deeply care about.

Despite it all, why is that some of us want to learn how to delete a Facebook account?

For starters, the Cambridge Analytica affair reveals how easily Facebook’s mass collection of user data can be acquired and exploited. The social media giant knew about the unprecedented data harvesting of its 50 million users for two years but didn’t think it was important to inform the affected people.

Here’s how this incident has impacted Facebook’s stock: 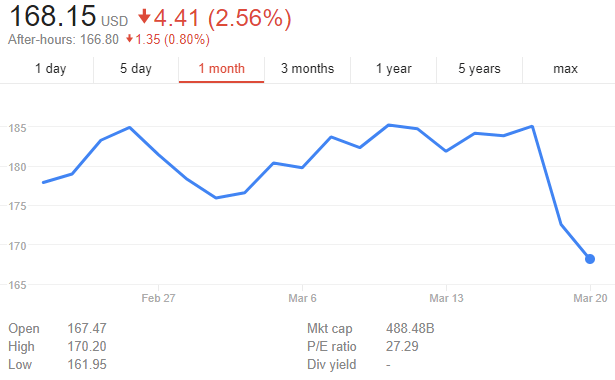 Here’s what WhatsApp’s Co-Founder tweeted after these revelations:

It is time. #deletefacebook

However, even if you remain unbothered about your personal information being collected and sold to third-parties that may use it to, for example, manipulate the US elections, there are a variety of other reasons why deleting your Facebook account may be a good idea. Before we discuss them, let’s go through the steps to delete your Facebook account permanently.

If you have reached this part of the blog, it means you are ultimately determined to remove or delete your Facebook account.

However, before saying your final goodbyes, you may want to consider backing up your life’s worth of data stored on Facebook. Your personal Facebook data usually includes valuable photos that you may have lost from your hard drive, but they are stored safely on Facebook’s cloud storage. 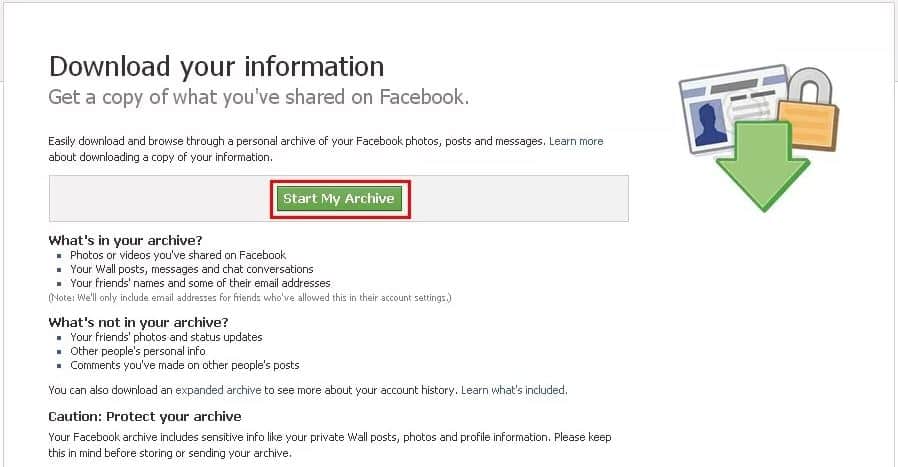 There may come a time in your life when you simply have had enough with Facebook. You finally realize how much precious time you have wasted on the social platform, instead of leaving your home and connecting with people in real life.

Facebook maintains a rather pesky and risky Terms of Service where they explicitly declare that they own your privacy. Not only do they claim ownership of your data, but they also ask you to keep the data up to date.

The social media giant has rolled out many amazing features recently, but users have abused some features to a great extent. Take, for instance, the Facebook Live feature, where users can live stream any content, which might be disturbing or insensitive.

Millions and millions of users are plainly addicted to the social media giant. Not a single minute goes by where people don’t check their Facebook feed. This gives you one more reason to know how to delete your Facebook account.

Your Facebook profile is the very first thing a cyberstalker targets to keep tabs on your every online or offline activity. To avoid online predators, cyberstalkers or online sexual harassers, you don’t have any other choice but to go offline from Facebook.

Regardless of the reason, if you have made up your mind and want to remove Facebook from your life once and for all, you have the following two options to choose from: deactivate the Facebook account or permanently delete it.

If you are not sure whether or not you want to learn how to delete a Facebook account, you may want to take the to deactivation.

When you deactivate your Facebook account, your profile is no longer visible to any of your friends, family or anyone connected to it. Likewise, during the deactivation period, no one will be able to search your profile as well. 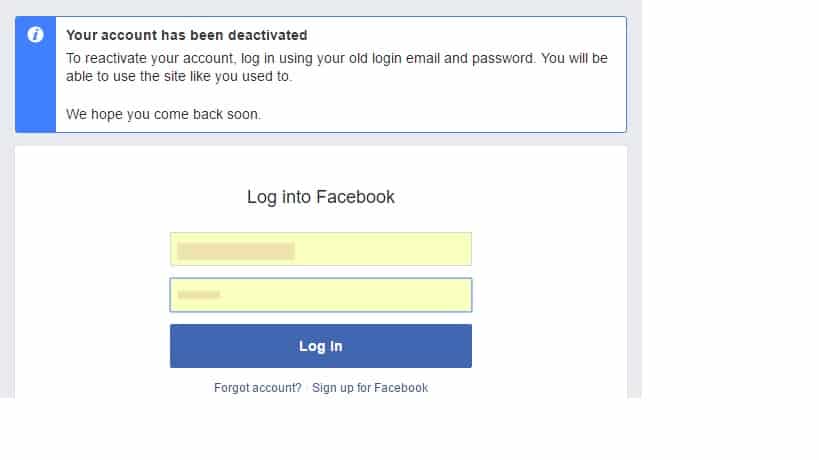 FacebookFacebook accounthow to delete Facebook account
PureVPN PureVPN is a leading VPN service provider that excels in providing easy solutions for online privacy and security. With 6500+ servers in 78+ countries, It helps consumers and businesses in keeping their online identity secured. 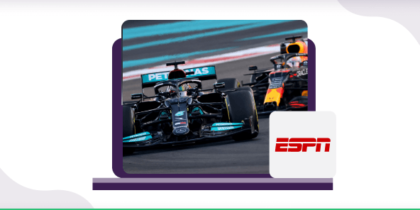 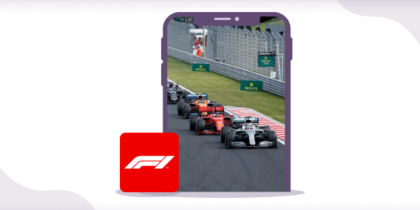 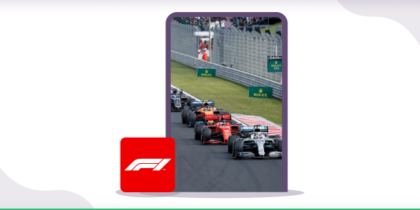 How to watch Formula 1 races on Android devices in 2022