DDoS Protected VPN & How It Protects Against DDoSing?

DDoS attacks are becoming increasingly common in today’s digitally charged corporate world. Many of us were reminded of that on October 21, 2016, when a massive DDoS attack took down Twitter, Spotify, Reddit, PayPal, and a huge swath of other websites. This incident alone should serve a major wake-up call for every web entrepreneur, regardless of the size of their business.

So, what is DDoS & What Does It Stand for?

DDoS stands for Distributed Denial of Service. According to Scott Schober, Cyber Security Expert and Author of Hacked Again, “DDoS attacks occur when a single system targets multiple systems by flooding the bandwidth (with either random junk or legitimate traffic) causing an extreme slowdown for legitimate users and possibly a full server crash. These incidents are on the rise because novice hackers can now launch targeted DDoS attacks with minimum hacking experience. However, the target of the attack must still deal with a costly and disruptive cleanup. “

The multiple systems used to attack a single target (server) are part of a Botnet network. To create a Botnet, the attackers usually infect systems with either malware or bypassing authentication.

According to a study conducted by the Ponemon Institute, an average cost of one minute of downtime due to a DDoS attack is $22,000! With an average downtime of around 54 minutes per DDoS attack, this becomes a heavy toll.

Apart from downtime, DDoS attacks can affect businesses by negatively influencing the trust of their customers. According to an infographic report by Corero, a cybersecurity firm, 45% of businesses experience loss of customers’ confidence and trust due to DDoS attacks.

Certainly, the costs of a DDoS attack depends upon various elements, for example, your business industry, the size of online business, competitors, and your brand itself.

A notable DDoS attack can critically harm a business and can lead to stern consequences for the company. Contemporary DDoS attacks on banks can cause disruption to online services for several days and also interrupt the processing of bank card transactions.

The DDoS protected VPN by PureVPN empowers businesses to ward off up to 3Tbs of DDoS attacks, the largest DDoS attack being recorded at 1Tbs that paralyzed the servers of OVH, a hosting service provider.

Are you running an E-Commerce website? Have you ever experienced a problem in your billing cycle? Suddenly, something goes wrong and your website becomes unable to process payments. This is due to DDoS attacks.

When your competitor can’t beat you with its services, they try new ways to ruin your reputation; and one way to do so is DDoSing. By targeting a lot of traffic on your server, they can jam your server that in result kills your internet speed, hence no payments.

PureVPN’s DDoS Protected VPN helps you to block all such traffic and keep your system running butter-smooth.

According to a recent report, gaming servers are on the hit list of dangerous DDoSing assaults. They have been targeted by some of the greatest and most extensive attacks in recent history.

Over the years, gaming has slowly shifted towards an online model. Plus, the easy availability of the internet has conditioned us to expect continual connectivity — both in massively multiplayer online and single-player experiences. However, online gaming platforms are highly vulnerable to latency and connectivity issues, making them ideal targets of DDoS attacks.

In fact, it is not just hackers who can launch DDoS attacks, but even angry gamers can resort to such practices to satisfy their personal grudges. Take, for instance, the case of Dyn DDoS attack that was launched by a “http://www.securityweek.com/disgruntled-gamer-likely-behind-october-us-hacking-expertdisgruntled gamer.”

Likewise, the WoW DDoS attack and Overwatch DDoS attack are some of the many examples that the gaming community has encountered over the years.

PureVPN’s DDoS protection add-on protects a gamer against all kinds of DDoS attacks to keep things fair and competitive. 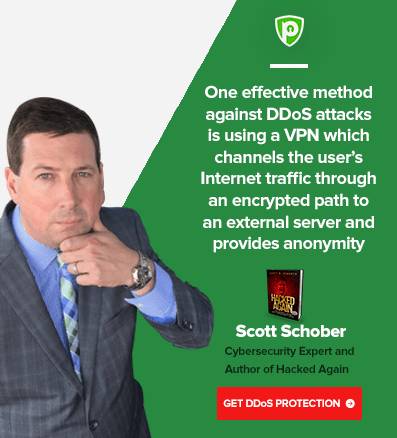 If you are hosting a P2P sharing website and you have huge numbers of visitors every day, then it’s difficult for you to secure your system from different attacks. Most of the time, it happened that a large number of fake users make the server so busy that genuine users don’t get the chance to download files from your server.

To make you run your business smoothly, PureVPN offers DDoS dedicated IP that helps to provide your website maximum uptime by keeping unnecessary traffic away from your server.

Forex business is all about taking action in real-time. A delay of even a second can make you suffer a loss of hundreds of bucks. DDoS attacks are an ultimate threat for forex traders. Just imagine, if there’s a DDoS attack on your device that kills the internet speed and at the same time, the commodity you invested in drops to its lowest price and you can’t take any action. PureVPN’s DDoS protected VPN safeguards you from such incidents.

Internet Service Providers (ISPs) are no strangers to DDoS attacks. In fact, DDoS attacks are one of the major concerns of ISPs. After all, a DDoS attack on an ISP can result in not only the loss of valued customers but also lower ISP ratings.

Regardless of the size of the attack, PureVPN’s DDoS Protected VPN can save the day not only for the ISPs but also for their customers. As a result, ISPs never have to worry about any DDoS attack cutting down their customer base.

How To Protect Against DDoS?

The scale of DDoS attacks has continued to rise over recent years, even reaching over 400Gbps. However, DDoS attack protection is getting easier and more affordable than ever thanks to the services provided by the renowned VPN service, PureVPN.

What Are The Benefits of DDoS Protection?

The benefits of using DDoS protection are:

Seeing how evildoers are bent upon destruction, it is only wise for companies to supplement their online security by using strict technological measures. With the increasing risk of DDoS attacks, PureVPN has launched Anti-DDoS VPN. PureVPN’s DDoS add-on is designed to automatically kill the worst online DDoS attacks to keep a business protected.

PureVPN offers DDoS protection via dedicated IPs from Canada, the US, France, and the Netherlands as a paid add-on. PureVPN’s DDoS protection is capable of defeating the most complex DDoS attacks and guarantees ultimate protection for its users.

Users can avail of DDoS protection add-on by adding it to their cart while purchasing the subscription.

DDos protected vpnDDoS Protection
PureVPN PureVPN is a leading VPN service provider that excels in providing easy solutions for online privacy and security. With 6500+ servers in 141+ countries, It helps consumers and businesses in keeping their online identity secured.

Our Chrome Extension Brings a Localized Experience in 7 Popular Languages

How Does A VPN Work?