You may require a Jordanian VPN service when you travel to this marvelous country, located in the Middle East.

Jordan is an Arab country that has seen its ups and downs over the past few years. However, that doesn’t stop the people there from enjoying their life and using the Internet. In fact, as per the last year’s statistics, the country’s internet user’s population exceeded over 87%.

Nonetheless, one of the best aspects of the country is that it doesn’t impose any significant restrictions on the internet, apart from the usual bans on anti-political discussions, etc. But, you still need a VPN for Jordan to hide any online footprint that could be used by hackers. Plus, you need to trick the geo-restrictions placed by streaming services such as Netflix US or Hulu and access them from any location.

The good thing for you is that PureVPN owns more than 2,000+ VPN servers, located in over 180 locations. It means we have servers in Jordan as well.

Learn where you can find our server in Jordan, and how you can connect to it for unlimited streaming, military-grade security and more. 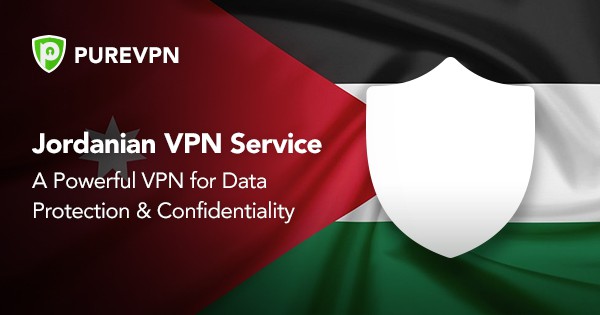 Where Can You Find Our VPN Server in Jordan?

Our Jordanian VPN servers give you the ease of connecting to the highest speed virtual private network and ensure secure browsing from any network. It also means that you would never again need to fear a public Wi-Fi or free hotspot when exploring the web or making online transactions.

Moreover, a local VPN server also lets you enjoy the Internet minus the usual hindrances such as higher latency, abnormal ping, etc.

Here are the details of our Jordanian VPN servers:

How to Connect to a Jordanian VPN Service?

There are many feats you can achieve when you get a Jordanian IP address. For instance, you can access local news outside Jordan or access location-locked services or applications from anywhere.

Here’s how you can get started:

Erase Online Footprints with the Best VPN for Jordan

Whether a country keeps strict tabs on the Internet activities of its users or not, you can never be sure about not being monitored or tracked every time you log in. Truth be told, you can never be assured that nobody is keeping an eye on what you are typing or browsing.

Plus, things get riskier when you are lured into joining a free Wi-Fi that might be set up by a hacker. Worst still is that if you join a fake Wi-Fi, you will unknowingly exposing your sensitive data to the unauthorized user or hacker.

To prevent such unwanted situations from happening, get PureVPN. With our military-grade encryption, you are assured maximum confidentiality of your data regardless of the network you are using. With such robust encryption in place, you get to stop every prying eye from peeking into your data.

Stream 1,000+ Streaming Services with Our VPN for Jordan

Getting access to region-restricted content in Jordan is another feat that you can only achieve with a VPN for Jordan. For instance, if you are tired of the local entertainment websites and want to enjoy Hollywood content on American Netflix, you would require a VPN to make that happen.

Similarly, as a Jordanian expat abroad, you might want to access the local news channel to get updates on your country’s affairs. However, you can only do that if the online news service isn’t restricted to foreign IPs. Otherwise, you would have to get a Jordanian IP from PureVPN and access local news and other Jordanian content from anywhere.

PureVPN is proud to say that it offers one of the most versatile and compatible applications in the industry. You can set up PureVPN on several different devices, consoles or operating systems such as

Not only can you find easy-to-install apps for all your devices, but you can also set up the client manually on your devices through step-by-step tutorials. The cherry on the top, you can use PureVPN on up to 5 devices simultaneously.

Why Shouldn’t You Use a Free VPN in Jordan?

There are a plethora of free VPNs available out there, but their use has a few downsides that you should be aware of.

If you want to access geo-restricted content and browse privately, you’ll require a VPN that uses strong encryption besides the standard location masking. Free VPNs, though, will let you down in this area.

After all, most of them don’t encrypt your data – this means your online activities are left exposed to third-parties like ISPs and cybercriminals. There’s also the issue of limited servers, making free VPNs a terrible option if you want to stream inaccessible content from across the world.

Furthermore, reports of these supposedly free services collecting and selling your browsing history for a profit aren’t new either. Due to these reasons, we’d recommend using paid VPN options like PureVPN.

How to Play PUBG in Jordan with a VPN?

Like other popular games, PlayerUnknown’s Battlegrounds has seen its fair share of controversy. Jordan’s Telecommunications Regulatory Commission (TRC) banned PUBG in July last year, citing its “negative effects”. The game has at times also been blocked by China, Nepal, Iraq, and some parts of India.

If you’re living in or traveling to Jordan, you won’t be able to play your favorite game unless your gaming system is equipped with a reliable PUBG VPN like PureVPN. Just connect to a country where PUBG is available, download PUBG (i.e. if you haven’t already), and access it without any restrictions – it’s as easy as that!

Best VPN for JordanJordan VPNJordanian VPN ServiceVPN for Jordanvpn serverVPN Server in Jordan
PureVPN PureVPN is a leading VPN service provider that excels in providing easy solutions for online privacy and security. With 2000+ servers in 141+ countries, It helps consumers and businesses in keeping their online identity secured.

Our Chrome Extension Brings a Localized Experience in 7 Popular Languages

How Does A VPN Work?