How to Watch Scam 1992 Free Online on SonyLiv

Are you browsing the internet and looking for a quick way to watch Scam 1992 online from outside India? Believe it or not, there is a safer and easy solution to this problem that doesn’t involve Telegram. All you have to do is follow the systematic step-by-step guide below to stream the Scam 1992 web series from any country, whether it is Australia, Canada, the United Kingdom, France, Germany, the United States, New Zealand.

Where Can I Watch Scam 1992: The Harshad Mehta Story (TV Series)

A story about an intelligent stock broker who scams the country and exposes major flaws in the Indian stock market will be a treat to watch. You can stream all episodes on SonyLIV in India, as they have official streaming rights, but the service doesn’t work in other countries. SonyLIV is the only platform where you are able to watch Scam 1992 because the show is not yet available on Netflix or on Disney+ Hotstar.

Watch Scam 1992 web series for free on SonyLiv from anywhere with PureVPN. Try out our service for free and enjoy limitless streaming.

The Easiest Way to Watch Scam 1992 Outside India for Free

This is what you have to do to watch Scam 1992 from abroad: You have to install a VPN app on your device, connect to an Indian server location, and change your IP address to India. In simpler words, changing your IP address means you are magically transporting your device to appear as if you’re in India while you are physically located in Canada, Australia, New Zealand, the United States, Europe, or anywhere else . Here’s how the magic happens in no time at all: 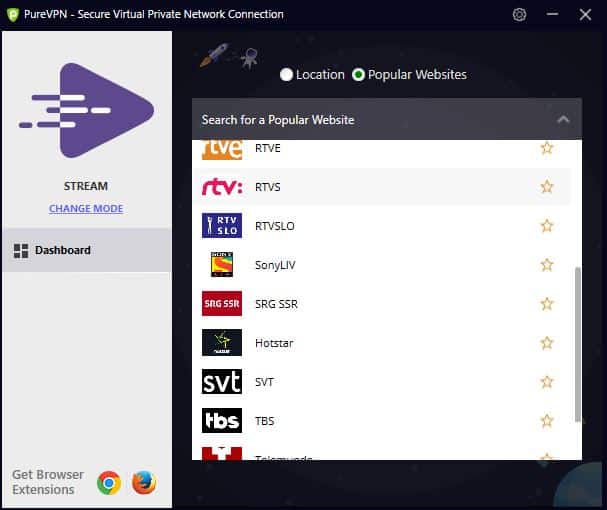 Lucky for you, the same guide works for other region-locked shows as well. If you are a person who regularly streams Indian shows and movies, then using a VPN app and SonyLIV can be a perfect mix.

What Else Can You Watch for Free with a VPN app?

You might be wondering, why use a premium VPN to access Scam 1992 when you have a chance to use a free VPN or install the TV show via Telegram? The problem is, free VPNs don’t  have enough servers available and don’t always work. Some VPNs are free because they make money by showing ads and selling your private data to the highest bidder. Here’s the deal with Telegram: it only offers movies and shows without copyrights, and that is illegal.

So, once you have a premium VPN that behaves as a key to unlock all region-locked services, you can use it to stream BBC iPlayer (free), Tubi TV (free), Peacock (free), Crackle (free), Disney+, Hulu, Hotstar, and SonyLIV, of course, and it’s all legal. On top of that, you can watch live sports, Premier League, La Liga, or Champions League on SonyLIV or BBC iPlayer with a VPN app that’s just a click away.

The TV show is based on a real story about a cunning broker, Harshad Mehta, who uses various plots to hammer up stock prices. It brilliantly portrays the characters while explaining how Harshad buys stocks and pushes their prices that involves mafia-controlled allies, banks, and even politicians.

Watch how one man catapulted the stock price from 1,200 to 4,500 points in a single year using his greedy mind and manipulative techniques. After he was caught and jailed for his crime, the stock points eventually dropped and he was exposed. At that moment, the country created some new reforms for the Indian stock market to avoid such scams in the future.

Current IMDb Ratings: It is voted 9.6 out of 10. That is higher than Breaking Bad and Chernobyl right now!

The must-watch series that’s got everyone talking! Rated 9.6 on IMDb, #SCAM1992 – The Harshad Mehta Story is directed by #HansalMehta and based on #SuchetaDalal and #DebashisBasu’s book "The Scam”. pic.twitter.com/FfyAiWjw4w

Most Popular Shows on SonyLIV:

What’s the Best Part about SonyLIV?

You can enjoy live sports on SonyLIV such as the UEFA Champions League, ATP tours, WWE, cricket, and Indian football leagues. Another plus is that SonyLIV is free to people physically located in India. If you are not currently in India, then you can still access SonyLIV by using a VPN app just as we have explained earlier in this article.

You can easily stream Scam 1992 web series on SonyLIV from anywhere in Canada by using a VPN app. This can help you access not only Scam 1992 but the entire SonyLIV catalog as well as other region-locked channels in your region. Just imagine a VPN as a master key that opens any locked vault no matter the country you are in.

No. Scam 1992 is only available on SonyLIV. Netflix doesn’t have licensing rights to include this title. But you can watch other Indian shows on Netflix such as Sacred Games and Ghoul.

You can watch SonyLIV by just creating a new account. Also, there is a premium subscription when you want to see specific shows and movies.

Disclaimer: PureVPN is not affiliated with SonyLIV

Watch How Stocks Make You Rich..or a Criminal

The new web series is highly rated by SonyLIV subscribers and everyone is talking about it online. We hope now you know how to watch Scam 1992 web series online outside India free because, as we’ve illustrated above, all it takes is 5 minutes to get started with this unblocking thing.

If you need support with anything else, then contact us via the Live Chat option.

Adware: What it is, How it Works and How to Get Rid of it?

What is a Subnet Mask?

How to Port Forward Plex TV