Don’t want to miss out on your favorite Bollywood content on SonyLIV when you’re outside India? Fear not, here in this guide, you’ll learn everything you need to know to access SonyLIV content from across the world in countries like Canada, the UK, the US, and Australia. Here’s how: 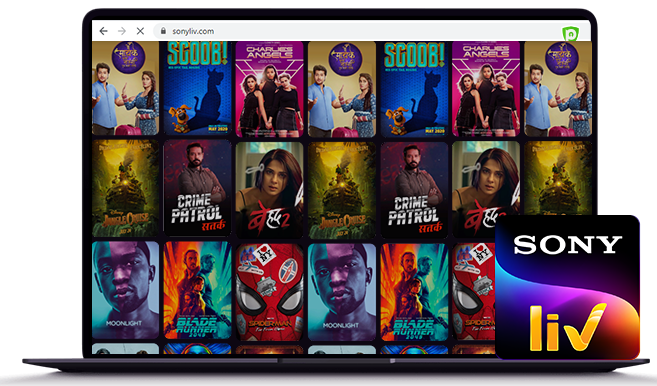 It’s undeniable that India has been producing some of the most successful web series over the past couple of years. Whether it’s Sacred Games, Mirzapur, or Paatal Lok, each series has had something new and unique to offer, earning critical success globally.

SonyLIV is another such streaming service that continues to showcase some of the best Indian content online. The best example of this is arguably Scam 1992, the 2020 show that has since become the highest-rated show on IMDb, a feat to be proud of truly.

Unfortunately, Sony LIV is also geo-restricted for viewership only in India, Pakistan, the UAE, Kuwait, Saudi Arabia, Oman, and Bahrain. So, what to do if you’re outside of these countries but don’t want to miss out on all the content SonyLIV has to offer? Well, read on below to find out more:

How to Watch SonyLIV Outside India

Considering how the number of Indian expats goes well into the hundreds of millions, it’s no surprise that there would be tremendous interest in accessing some of the most popular streaming services from back home. SonyLIV is one of those services, and unfortunately, it’s geo-restricted.

What that means is that even if you have a SonyLIV account, you won’t be able to access it. Naturally, you might feel sad to be missing out on some of your most favorite content. However, there’s some good news, you don’t have to! Not if you have a premium VPN.

Here’s all you need to do:

If you haven’t already tried to access SonyLIV from outside India, let me tell you what’ll happen if you do. You’ll get an error message that says, “The content you are trying to watch is not available in geography.”

This is because of something called “being blockeds.” This is when websites, specifically streaming ones, restrict their users in certain locations from viewing certain content. In some cases, this could apply to entire websites. SonyLIV is one such site. If you try accessing it from any location in India, you won’t have any issues. However, as soon as you’re outside India, you won’t be able to do so unless you have a VPN.

But what exactly are being blockeds? And more importantly, why do websites feel the need to have them? After all, wouldn’t streaming sites want their content accessible to as many customers as possible?

The answer to that is a little more complicated than that. Unless a streaming service produces its own content, known as originals, they rely on distribution deals to have content from other studios on their site. Since these studios own the content being shown, they can leverage their position and negotiate these distribution deals for each region separately.

For instance, Harry Potter is a Warner Bros property that is only available to view on HBO Max and Peacock TV. However, in Turkey, Warner Bros has a distribution deal with Netflix, meaning that Netflix users in Turkey can easily stream all their favorite Harry Potter movies while users in other countries can’t.

How a VPN Can Help You Watch SonyLIV Outside India

So, now that you know what being blockeds are and why streaming sites need to enforce them strictly, the next question in your mind is probably how a website knows when to geo-restrict you and when not to.

The answer to that is your IP address. For the uninitiated, your IP address is your primary form of identification on the web. That’s how websites know how to best customize your journey throughout their website. For the most part, it is a good thing. However, that’s also how streaming sites know who to block from viewing content on their site.

That’s where a VPN comes in. When you connect to an Indian server via a premium VPN, it “masks” your actual IP address, which might be somewhere in the UK, with an Indian IP address. Therefore, when you visit SonyLIV, the website shows you all the content that a visitor from India would. And that’s how you evade being blockeds in a matter of minutes.

How can I watch SonyLIV in Canada?

You can easily watch SonyLIV in Canada by connecting to an Indian server via PureVPN and logging in to your account. All it’ll cost you is less than 17 CAD

How can I watch SonyLIV in USA?

You need to connect to an Indian server via PureVPN and then log in to your account as usual. In terms of price, it’ll cost you around $13.63

How can I watch SonyLIV in Europe?

It doesnt matter where you are in Europe. You can easily watch SonyLIV if you connect to an Indian server via PureVPN. It’ll end up costing you less than €12

How can I watch SonyLIV in Australia?

You can easily watch it anywhere in Australia using PureVPN’s Indian server. If you end up choosing the yearly package, it should cost you less than 18 AUD.

How can I watch SonyLIV in the UK?

If you’re in the UK and want to watch your favourite movies or shows on SonyLIV, you can do so by connecting to an Indain server via PureVPN. With the yearly package it should cost you less than £10 per year.

How can I watch SonyLIV in New Zealand?

If you;re in New Zealand, you can get SonyLIV outside India in New Zealand via PureVPN’s Indian server. It will cost you less than 20 New Zealand dollars for a yearly subscription.

What Can You Watch on SonyLIV?

Here’s a detailed list of the best TV shows, movies, and sports events you can easily view on SonyLIV outside India:

Here are some of the best shows you can watch on SonyLIV outside India:

Here are some of the best movies you can watch on SonyLIV outside India:

If you chose the free membership option when signing up for SonyLIV, you’d be happy to know that there’s a lot of content you can access for free. This includes some of the most highly watched shows on Indian television, such as The Kapil Sharma Show and Tarak Mehta Ka Ulta Chashma, in addition to other popular regional and national shows.

Can I watch Live TV on SonyLIV?

Yes, if you have a paid subscription, you can access Sony Live TV Channel and catch the live streaming of movies and TV shows in full HD.

What is a SonyLIV special?

A SonyLIV Special is a subscription plan that lets you watch, download, and preview episodes whenever you want. Additionally, you can preview live sports events for 10 minutes before deciding whether you want to watch it or not. It is available with the 7-day trial for both SonyLIV and SonyLIV Special+.

Does SonyLIV have a free trial?

Yes, SonyLIV actually offers two different trials. The first one is a standard 7-day one that gives you access to almost all the features and channels available with SonyLIV. The second one is a 30-day trial period that gives you a wider time range to test the service but with limited access to some of the service’s premium features.

Does SonyLIV work outside India

No, SonyLIV is restricted for viewership only in India. Fortunately, you can gain access to it from any country in the world outside India via a premium VPN such as PureVPN. Just connect to an India server, go to Hotstar’s website, log in, and start streaming.

How do I watch SonyLIV in Canada, USA, Europe, Australia, UK, and New Zealand?

You can easily watch SonyLIV from any of these countries with a premium VPN like PureVPN. Just connect to an India server and voila! You can start streaming all your favorite content from SonyLIV.