How to Set Up a VPN for Sony Smart TV

Want to use a VPN on your Sony Smart TV? We’ve got you covered!

With more people shifting from traditional TV viewing to online streaming, smart TVs have gained massive popularity over the past few years. One of the most popular brands in this regard is none other than Sony, which has been at the forefront of advancements in television technology.

Sony smart TVs are not only intelligent but also rich in terms of features, ultimately treating you to a high-end user experience. From top-of-the-range HD and 4k to cream-of-the-crop OLED models, users have plenty of choices when it comes to purchasing a TV from Sony. 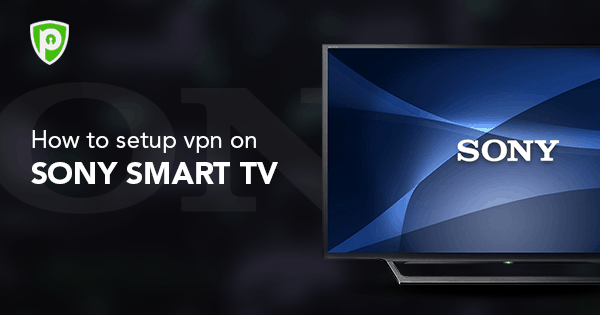 Furthermore, Sony smart TVs come integrated with a decent array of streaming apps, and you also have the ability to download third-party ones. However, the amount of content you can watch will be limited due to what’s called geographical restrictions.

The good news is that you can get around these roadblocks by using a VPN on your Sony TV, but that’s not the only thing it can help you with. Read on as we explain why you should use a Sony Smart TV VPN and how to set one up.

Set up PureVPN on your Sony Smart TV and stream geo-restricted content at throttle-free speeds. Get PureVPN’s $0.99 7-day trial today and take the service for a test run.

Reasons Why You Need a VPN for Sony Smart TV

If you aren’t yet using a VPN on your shiny Sony smart TV, here are a few compelling reasons why you should:

As mentioned earlier, your Sony smart TV allows you to stream a variety of content through preloaded apps. But depending on your location, you might miss out on popular channels such as BBC iPlayer and Netflix, to name a few.

If you want to make the most of your Sony TV, you’re better off changing your region to the US or UK. In this scenario, you’ll need to set up a Sony Smart TV VPN (more on this later on) and spoof your actual IP address and location.

How to Change Region on Sony Smart TV

Did you know that most Internet Service Providers limit your bandwidth when you use large amounts of data? If you’re noticing a significant drop in speeds while streaming on your Sony TV, then it’s very likely that your ISP is throttling you.

The easiest and most convenient solution to bypass ISP throttling is to use a VPN. It routes your data through an encrypted tunnel, hiding your streaming traffic from the outside world – including your ISP. The result? Throttle-free speeds!

Need a full picture on using a VPN. Here’s a quick look at How to Use a VPN.

Are you looking for the best Sony smart TV VPN? PureVPN has got your back, like always! We boast one of the most extensive networks in the industry, with more than 2,000 VPN servers and 300,000 anonymous IPs in over 141 countries across the world.

Having a wide range of server locations available at your disposal means that you can access and stream any content you want, regardless of where you are located. Not only this, but our global server network also consists of hundreds of dedicated streaming servers.

This enables you to watch your favorite content in HD at high-speeds without any facing any buffering issues. Besides military-grade encryption, PureVPN also offers a plethora of features such as Internet Kill Switch and WebRTC leak protection to keep your streaming activities hidden from third-parties.

As far as compatibility is concerned, we’re one of the few with a VPN app for Android TV – it’s sleek and easy-to-use! However, you also have the option of configuring PureVPN on your router to provide the same level of protection to all household devices, including your Sony smart TV.

The best part of all, our plans are backed by a generous 31-day money-back guarantee so that you can test it risk-free. Moreover, if you hit a snag while using PureVPN, our friendly customer support team is available 24/7 via live chat to guide you in the right direction.

How to Install a VPN on Sony Smart TV

Before we dive into the process of setting up a Sony smart TV VPN, you should know that the brand runs two different types of OS. All the newer Sony TV models come preloaded with Android TV, whereas the older ones have Sony Internet TV.

If you’ve purchased a Sony smart TV recently, the chances are that it’s running Android TV, and you can install our app directly from the Google Play Store. On the flip side, you’ll have to install a VPN on your router if your Sony TV isn’t new enough.

Note: You’ll need a PureVPN account and VPN compatible router for the steps mentioned above.

Here’s one of the most common questions we came across when researching the problems users face when using a VPN on their Sony smart TV.

Can apps like Netflix and iPlayer detect a VPN connection made from Android TV?

Yes! After all, both of the streaming services have implemented anti-VPN measures to prevent users from accessing content from outside their licensed regions. However, if you use an Android TV VPN on your Sony TV, you can easily watch what you want without raising any red flags as we have mechanisms in place to get around their anti-VPN technology.

That’s all from us for now. If you have any questions, drop a comment below, and we’ll get back to you as soon as possible!

How to Watch Formula1 on Android Phones