What is OpenVPN & How to Use It?

OpenVPN is a popular SSL-based tunneling protocol used in the implementation of virtual private networks. Offering the perfect combination of security, speed, and compatibility, it is one of the best VPN protocols out there. 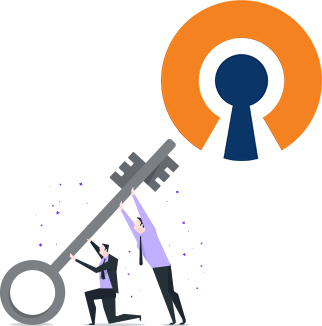 Unlike other IPSec-based tunneling protocols, OpenVPN relies on SSL/TLS for authentication and encryption. It is the standard security technology to create secure, remote site-to-site or point-to-point connections. SSL is widely used for protecting financial transactions, data transfers, email, and more.

OpenVPN is compatible with most major and lesser-known operating systems in use today. It provides powerful encryption standards and is excellent when it comes to circumventing restrictive firewalls and prohibitive geo-blocking. The open-source VPN protocol can be configured to use either TCP or UDP and supports up to 256-bit encryption. Since it is open-source, security vulnerabilities are usually fixed by the open-source community as soon as they are found. OpenVPN is often used due to the various benefits it brings to the table. For starters, unlike other protocols, it is compatible with Android and iOS. It also can bypass any blockade that it encounters. Also, it can access many ports for communication.

OpenVPN – A Brief History about its Programmer

Initially released in 2001, the OpenVPN Project was programmed by James Yonan. He had a background in financial trading as well as software development for the original IBM Personal Computer. Yonan is still involved with the OpenVPN Project and serves as the CTO.

OpenVPN – One of the Few Open-Source Protocols

Unlike most other VPN protocols, one of the best things about OpenVPN is its open-source nature. It can be checked, modified, and updated by anybody. The entire source code for the latest and older versions of OpenVPN is available to all on its site.

Furthermore, users are encourage to submit bug reports so that developers can continually make improvements to the source code and release regular updates. This ensures any issues are identified and fixed quickly.

How Does OpenVPN Work?

To put it simply, OpenVPN establishes a private connection – or tunnel – between your VPN client and the VPN server. The traffic passing through it is fully protected with encryption, keeping your data safe from ISPs, hackers, and other third-parties.

Data packets are encrypted by the OpenVPN client before they leave your device or computer. These are received by the OpenVPN server, which uses a secret cryptographic key for decryption. The decrypted data packets are sent to the intended web server like Disney+, for example. Upon receiving them, the web server sends your requested data to the OpenVPN server, where it is encrypted once again. The data is then sent back to your device or computer running the OpenVPN client, which decrypts it.

UDP is the acronym for User Datagram Protocol and does not perform error correction. As a result, the packets are received without any retries or acknowledgments. This makes UDP faster but less reliable than TCP.

TCP is the acronym for Transmission Control Protocol. Unlike UDP, TCP performs error correction. Additionally, its re-transmission mechanism ensures both ends can receive packets. However, the increased reliability results in increased latency.

OpenVPN has support for DHCP and dynamic IP addresses, which can result in better anonymity as you browse the Internet.

All your communications are kept secure by various methods, such as shared keys, HMAC authentication, and 256-bit encryption via OpenSSL.

OpenVPN has several methods to authenticate peers to one another, including pre-shared keys, username/password-based, and certificate-based authentication.

OpenVPN supports third-party plugins and scripts, allowing you to extend its functionality with enhanced authentication, RADIUS integration, and more.

OpenVPN can run on any port between 1 and 65535. This multi-port functionality makes OpenVPN an ideal tunneling protocol for bypassing firewalls.

Here are some advantages of using OpenVPN:

If you want to safeguard your data from interested entities, OpenVPN is a highly recommended protocol. It uses high-end ciphers and 256-bit encryption, making it close to impossible for cybercriminals to intercept or steal your information via man-in-the-middle attacks.

One of the best things about OpenVPN is that it can be installed and used on all popular desktop and mobile platforms, such as Mac, iOS, Android, and Windows. It also supports less popular platforms like Solaris, FreeBSD, and OpenBSD.

It is not easy to detect and block OpenVPN connections as they can use ports on both TCP as well as UDP. Furthermore, configuring OpenVPN on port 443 will enable you to dodge any firewall as it is the same port used by HTTPS traffic.

As opposed to other protocols, OpenVPN gives you the freedom to choose between TCP and UDP for transmitting your data. Having more control over your connections will make it easier to tweak them as per your needs.

This incredibly useful security measure reduces the risk of your private data getting compromised considerably. Your VPN connection is resistant to various types of hacks as unique keys are generated for every session.

Here are a few disadvantages of using OpenVPN:

If you want to configure OpenVPN manually, the chances are that you’ll run into issues. After all, the instructions are too complicated for the non-tech-savvy. You are better off choosing a VPN service as the OpenVPN setup process is handled in the background.

OpenVPN isn’t integrated into any operating system, so you’ll need to install third-party software to use it. This drawback, though, has been mitigated to some extent thanks to the availability of VPN services with easy-to-use user interfaces.

OpenVPN is widely considered as the most secure tunneling protocol. However, the robust security it offers may lead to a drop in your connection speeds.

OpenVPN vs L2TP vs IKEv2 vs SSTP vs PPTP. The following is an in-depth comparison of OpenVPN against other common VPN protocols. PureVPN offers support for all major VPN protocols and platforms.

How to Use OpenVPN

If you want to set up a VPN connection using OpenVPN, there are two ways to go about this. The easiest method is to use a VPN service with OpenVPN support, such as PureVPN. In this scenario, all you have to do is:

If you’re a user with technical experience, you might prefer the manual configuration route. You’ll find the required steps to set up OpenVPN manually on different devices below. Before you begin, make sure that you have a: