Sorry, Disney Plus is not Available in your Country - Easy Workaround 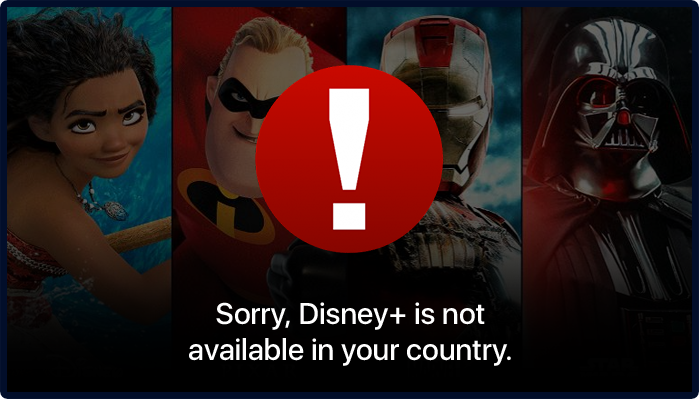 Disney Plus is the brand new streaming service owned by Disney. It was launched just a few weeks ago and has been the center of attention since then. First, it faced outages in many areas on its launch day, followed by a massive breach that led to thousands of users’ accounts getting hacked.

Disney Plus has been made available in only five countries for now. These include the US, Canada, Netherlands, Australia, and New Zealand. It is a no-brainer that there are possibly millions of Disney fans around the world who are looking for ways to access Disney+ amid the regional limitations and blockade.

Is Disney Plus Available in My Country?

If you live outside the five countries where Disney Plus has just launched its service, you will not be able to access Disney+. Countries where the service is now available include the US, Canada, Netherlands, Australia, and New Zealand. If you live outside these countries, Disney+ will remain not available in your country, unless you connect to VPN.

To subscribe to Disney+, you will need to change your location to a region where Disney+ is available. The best and safest way to do so is by connecting to a Disney Plus VPN such as PureVPN. Once you have connected to VPN, you will be able to sign up for Disney and complete the payment process.

There are multiple ways to make the payment for Disney Plus. You can subscribe to Disney+ basic plan at $6.99 per month, or you can get the Disney+ Bundle that offers all the Disney+ content, all Hulu content including the 40 live US TV channels, as well as access to ESPN+.

You can make payments via PayPal or via credit card. If that does not suit you, you can also opt for a Google Play Store gift card and sign up on an android device. If you have an Apple device, get an iTunes gift card and use it to sign up for Disney+ on your Apple device.

Here is how you can get VPN and use it to watch your favorite TV shows and movies on Disney Plus:

PureVPN is the best streaming VPN that can resolve most of your streaming related issues. Some people resort to using free VPNs and proxy services, which are not only infective but also make you prone to cyber-attacks. Also, free VPN services will cause significant drops in your streaming speeds, which causes constant buffering and annoyance.

You can evade past all of that with VPN. With thousands of servers that are optimized for streaming, you can watch Disney Plus from anywhere in the world.