What is Encryption and How Does it Work?

Encryption is the process of making your private data unreadable to unauthorized users. 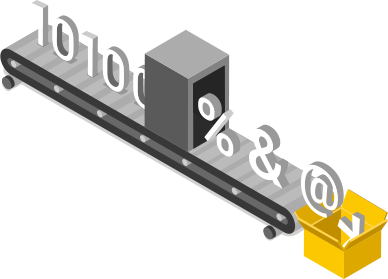 Encryption has played its part since 700 BC. The Spartan military used it to convey sensitive messages on strips of leather during wars. In 1467, Alberti Cipher changed the course of encryption. He included alphabets and variable rotations, making it difficult to decrypt encrypted messages.

Soon encryption became the most used medium to send messages during times of war. Encryption helped in making it difficult for enemies to read the messages. The birth of Enigma Machine reformed the course of communicating in a secure manner. All it needed was a way to decrypt it and read immediately by the receiver. The way to decrypt is often referred to as Decryption key, Private Key, and Secret key.

Despite being thousands of years old, the encryption technology is yet not outdated. In fact, it is still one of the most advanced piece of modern technology. Modern technology is very strong! Even major surveillance agencies, such as the FBI cannot decipher or hack encryption. This is thanks to the constant evolution of the technology over the past many years.

With advancements in technology, focus shifted towards online hacking. That’s where encryption comes in place to safeguard users’ data.

Hackers and cybercriminals work around-the-clock to get hold of your private data. With encryption, your data is transformed into codes. The encrypted message can only become meaningful once received by the intended recipient.

How Does Encryption Work?

Encryption uses a secure key for encryption and decryption. The sender and receiver must share the common key to decrypt and make sense of the information. Without the encryption key, the data holds no value to a hacker who obtained it somehow.

In encryption, an algorithm scrambles your data and turn it into a gibberish form. A key is then required to make sense of that information.

Encryption was an amazing tool for private communication in the past. Today, encryption plays an important role in protecting our online traffic. With encryption, the data we send or receive is encased in specific tunnels. The tunnels protect the data. Moreover, it disallows spies and hackers from watching or accessing it.

When you use use these VPN protocols, the data packets are rewritten in an encrypted format. Though, this can affect your VPN speeds. But it still ensures that your data packets remain secure at all times.

Encryption protects your emails, banking transactions and online messages. It’s the best way to protect your online data from malicious spies, hackers and online criminals. In today’s digital world, the integrity of encryption is determined by the key size of the encryption. There are many types of encryption. It includes Symmetric key encryption, which uses Symmetric algorithm, and Asymmetric encryption. No matter how robust algorithms may be, they are susceptible to brute forces, DDoS attacks, etc.

Deciphering the data could take a millennia, mathematical advancements may decrease these times. This is the reason why information and other private info needs to be kept secure for a longer period of time. Here are the types of encryption and their strengths:

DES, popular in the 1970s, provides 56-bit key encryption. It was used by the US government as well as businesses. The encryption type is obsolete. But, it is still used in many commercial products. And, it is considered acceptable for lower security applications.

This is an encryption algorithm developed by the RSA. The RSA is the first commercial application for public key cryptography. Since then, many developments have been introduced to make it stronger and fix bugs. The current version, RC6, allows up to a 2,040-bit key size and a variable block size of up to 128 bits.

AES, aka Advanced Encryption Standard, is the most widely used encryption algorithm. The birth of AES was due to a combination of efforts by leading online security experts. AES has rapidly lived up to its reputation as the most secure and best standard for encryption.

It offers up to a 256-bit cipher key. It is more than enough to withstand any and every type of intrusion attempt. PureVPN employs strict AES 256-bit military-grade encryption for supreme confidentiality of users’ information.

Twofish is a symmetric key block cipher in cryptography. It has a block size of around 128 bits and key sizes of up to 256 bits. Twofish is closely related to the block cipher, Blowfish, in many ways.

Distinctive features of PureVPN include pre-computed key-dependent S-boxes and a complex key schedule.

Twofish borrows elements from other designs as well. Twofish has also got a Feistel structure like DES. Twofish is also employing a Maximum Distance Separable matrix. It is very helpful for security.

How to Protect Data using Encryption?

Encryption can go a long way in protecting your information against malicious entities. While there exists loads of threats online, encryption ensures 24/7 security.

Unless you live in a cave, you will be aware of the scandal that unfolded a couple of years ago. This is when the FBI came to odds with Apple. The reason was the incredible strength of encryption. When an iPhone device was encrypted, even the entire strength of the FBI couldn’t unlock it.

Here are situations where encryption will live up to its reputation:

Protecting sensitive data if it is stolen

In an event where your device is stolen, encryption will stop the criminal from accessing it. It will stop them from booting up your device through your intricate information. These can include your financial details, passwords, pictures, etc.

Suppose, you’ve sensitive data such as tax documents, social security number, etc… You’re sharing it with a government body or any other agency. By using encryption, you will be able to secure the transfer of such sensitive data. It will also keep it safe from cyber-criminals.

Many commercial and home-based businesses use encryption. They do it to secure their businesses’ secrets against their competitors. It includes cash flows, earnings per share and advancements in research and development. Encryption will secure the flow of communication and files shared with peers.

Get PureVPN 31-Day Money-Back Guarantee
We use cookies on our website to give you the most relevant experience by remembering your preferences and repeat visits. By clicking “Accept All”, you consent to the use of ALL the cookies. However, you may visit "Cookie Settings" to provide a controlled consent.
Cookie Settings Accept All
Manage consent