Disney+ is not working with VPN?

As Disney Plus subscriptions are still not available in many countries, using PureVPN is the best way to unlock it. Now you can watch thrilling Disney Plus movies and prevent lockdown stress easily with PureVPN. 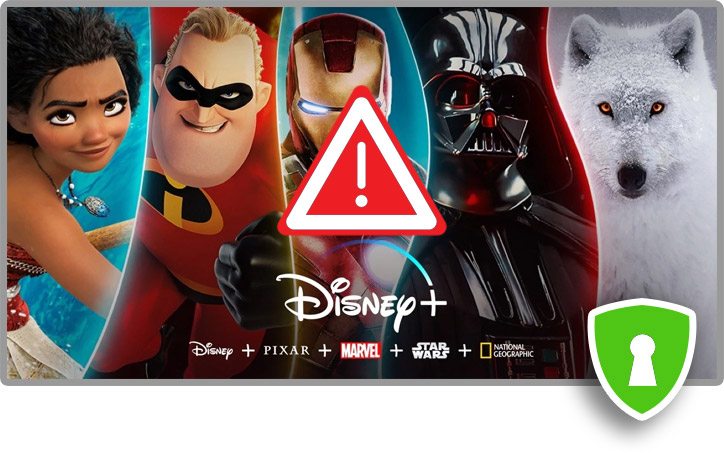 Watching a Disney movie is the best way to release stress after a hard day at work. Disney owns a large portfolio of amazing content that anyone would love to binge-watch over and over again.

Previously, a large chunk of Disney content was available on different streaming channels on the web. That was a bit of a problem for someone who only had subscription to one or two channels at max.

Fortunately, Disney came up with an amazing solution by launching their very own streaming service which contains all of their original content. So whether you’re a MCU fan or a Star Wars fan, you can watch all of these movies easily on the Disney+ channel.

Disney Plus is a relatively new streaming service that is already getting all the hype in the world. Since its launch, we saw it facing many outages just because there were too many people subscribing and using it at the same time.

“Sorry, Disney+ is not available in your country”

Its hype surpasses its availability though, and there are many people who are trying to access the service via a VPN. But are they succeeding? Most of them are not. So, is there an easy workaround? There is, and you can read about it below.

VPN Not Working with Disney Plus? Try this…

Switch to PureVPN because it is currently the only VPN service that works with Disney+.

PureVPN has been thoroughly tested and it can unlock the US, the UK, CA, AUS, and other versions of Disney+ from anywhere. The servers are kept optimized to offer the fastest speeds with HD quality.

PureVPN comes with a 31-day money-back guarantee, which means that you can try it out for free and only become a paid user once you are satisfied with the service.

Why Disney+ is not working with VPN?

Like Netflix, Disney has taken a harsh stance against VPN services. There are even reports that some of the user accounts were banned because they tried to access the channel with a VPN. In such a scenario, should you use a VPN to access Disney Plus? That depends on which VPN service that you’re using.

PureVPN is a fantastic streaming VPN service that offers the fastest speeds while streaming Disney+ from anywhere.

PureVPN is the best streaming VPN that you can get your hands on. It offers complete internet freedom to all netizens, with access to popular channels such as Netflix, Disney+, and more. PureVPN maintains an extensive network of 2,000+ optimized servers in 140 countries. These servers are handled by specialists so that you never see a drop in performance.

You can get all this and more with PureVPN. So get PureVPN today and enjoy unrestricted access to Disney Plus from anywhere in the world!