How to Install Kodi on Apple TV

Getting bored during the lockdown? Learn how to install Kodi on Apple TV and use a VPN on your device to get more addons. PureVPN is great at unlocking Kodi addons. 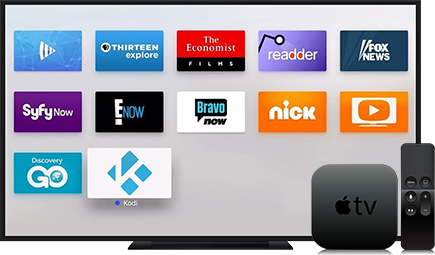 What is Apple TV

Apple TV is a digital media player developed by Apple inc. that has been very popular in the streaming community for the better part of a decade. Using apps from the Apple store, Apple TV offers a plethora of movies and other entertainment channels. Moreover, you just need a steady internet connection to turn it into the ultimate internet streaming device.

Kodi is a digital media player but unlike the Apple TV device, it is a software that comes in the form of apps for most devices and operating systems. With the advent of hundreds of add-ons, it lets you stream all types of media content including movies, TV shows, live TV, live sports and more. These add-ons are super easy to install and let you stream content from all around the world at your fingertips

How to Install Kodi on Apple TV Generation 1

The first generation was discontinued by Apple back in 2010 and three versions of the device have been released since then. But for those who are still using Apple TV 1 and want to use Kodi on the device, there’s an easy way to do so.

Apple TV 1 comes with a built-in hard having capacity upto 160GB which makes it easier to store different media files directly on your Apple TV device. The installation is very simple and al you need is a handy USB drive having 1GB or higher free space.

How to Install Kodi on Apple TV Generation 2

The generation 2 Apple TV is probably easiest version to work with Kodi. Please note that the newer Kodi versions do not support Apple TV 2 so you may opt for an older version like Kodi Helix.

How to Install Kodi on Apple TV Generation 4th, 5th Generation and 4K

You may have noticed that we have skipped Apple TV Generation 3 but only because it is not compatible with Kodi. You can use Apple AirPlay to use Kodi on your Apple TV 3 from another Apple device but is it really worth it? Apple TV 3 is very hard to configure thus the majority of users resort to another version of the device to use with Kodi.

There are 3 different ways to install Kodi on Apple TV 4 & 5 and Apple TV 4K. Before we describe each of them in detail, let’s list down the official requirements for the setup.

Now that we have created an IPA file, let’s get down to the installation method without further ado.

Here’s how you can install Kodi on Apple TV 4 & 5 using Xcode. Please note that Xcode is available for Mac users only.

Method 3: How to Install Kodi on Apple TV 4K Wirelessly

The process to install Kodi on Apple TV 4K is similar to Apple TV 4th and 5th generation using Xcode. However, you have to establish a wireless connection since Apple TV 4K doesn’t come with a USB slot. Here’s how you can do it.