IMO, like many other VoIP apps, is banned or inaccessible in several countries. The only solution to that problem is by using the best IMO VPN on the market, as it will allow users to circumvent any restrictions on using IMO as imposed by any government entities.

IMO’s surge in popularity may come as a surprise to many in the Western Hemisphere. In Asia and Africa, it ranks as one of the most downloaded and used apps alongside the likes of WhatsApp and Skype.

However, this popularity has not come without a price. Like its more famous rivals, Skype and WhatsApp, IMO has often found itself banned in several Middle Eastern countries. Additionally, some educational institutions and corporations have banned the use of this app, citing its unsafe nature.

We hope you will find the answer to all of your questions about which countries are blocking IMO and how a VPN solves that problem for you, Read on to find out more: 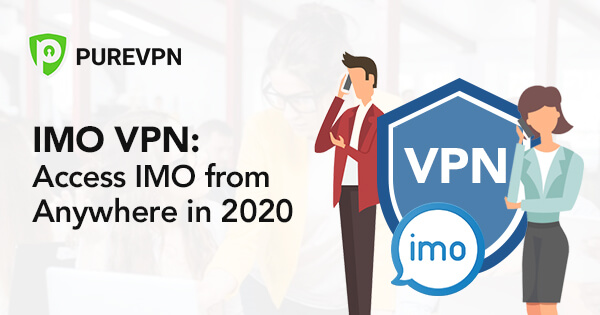 Reasons You Need an IMO VPN

A Virtual Private Network (VPN) is the most reliable way of evading any form of digital censorship. Think of the entire internet as one big and busy highway. Incoming and outgoing data is all the traffic. A VPN is essentially like a private tunnel underneath that still lets you send and receive data, but anonymously.

It isn’t even that complicated to use, as only a few simple clicks separate you from complete safety online. Once connected, you can go ahead and use hundreds (and sometimes thousands) of different servers.

IMO’s interface, as well as its free-to-use model, means that it makes it easier for users to use on their devices. However, countries like Dubai, Qatar, Saudi Arabia, Iran, Kuwait, China, and Egypt have placed a blanket ban on its use.

Nevertheless, this ban can be easily evaded thanks to a simple tool known as a VPN. With a simple click of a button, you will be able to restore your continued access to the IMO service without jeopardizing your identity online.

These servers bring an additional layer of encryption to your connection while keeping your browsing history safe from any form of prying eyes. As mentioned earlier, this is the most reliable way of unblocking IMO and using it without being exposed online.

For those needing additional clarity, the way this works is that a VPN virtually places you in another country, so you’re able to access content from anywhere without restriction. And that means you can get full access to IMO once again.

By now, most readers will have understood why a VPN should be their preferred way of unblocking access to IMO and keeping themselves anonymous online. But there are thousands of different VPN providers available online. However, PureVPN tops them all.

There are numerous reasons why PureVPN is consistently regarded as the best VPN on the market. Based out of Hong Kong, users can expect the utmost amount of security while its no-logs policy guarantees anonymity, as none of your browsing behavior is stored anywhere.

Thanks to its 2000+ servers, PureVPN can offer the best experience for users that want to retain access to IMO across the world. It supports all major platforms and devices, meaning that you’ll never have to worry about government regulation getting in way of your IMO communications.

Aside from being one of the most affordable VPNs on the market, PureVPN also has the most stellar reputation with a perfect 5 stars on Trustpilot, consolidating its position as the best VPN for IMO.

How to Connect to IMO VPN?

As mentioned earlier, the process is easier than most people assume. A few simple steps and you’ll be able to access IMO from anywhere without any restrictions:

Here are some other questions that users have about IMO VPN:

Do I Always Need a VPN to Access IMO?

In short, no. There are only a handful of countries that have maintained a complete ban on the use of the service. They’re able to do so by blocking your IP connection. Using a VPN ensures that your IP is masked, allowing for easy access to the service’s servers. However, it is recommended that users use a VPN to connect to IMO even if it isn’t banned in their country.

Why Can’t I Use a Free IMO VPN?

There are numerous reasons why free VPN services are horrible as far as privacy and protection are concerned. While there are frequent problems of speed throttling, unstable connections, high disconnection rates, as well as data logging.

And then they sell this data to third-parties including advertisers and sometimes the government. Hence, it is highly recommended that you opt for a reliable paid VPN service like PureVPN and stay completely safe online.

Using a VPN is the safest and the most recommended option to ensure that users never have to be disconnected from the service. A VPN keeps users’ browsing history safe while also being extremely effective at evading any form of digital censorship laws.

PureVPN is the VPN that best delivers all these functions while being one of the most affordable options out there. It has delivered consistently exceptional service to users across the world. If you want to continue accessing IMO from anywhere in 2020, PureVPN would be the most ideal option to do so.