How To Watch BBC iPlayer On Chromecast 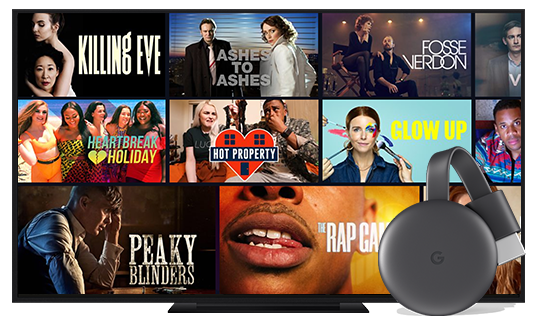 There is everything good on the streaming service. After all, the service comes straight from the powerhouse of the BBC itself. So you can expect a great number of TV shows, docu-series as well as movies.
Take for instance, the Killing Eve TV series, where you get to witness the slow-motion collision between a beautiful assassin and a low-level MI5 agent. Or you may also want to check out the Fleabag that comes from the creative mind of Phoebe Waller-Bridge.
Here are some other shows that you would definitely love to watch on BBC iPlayer:

Is BBC iPlayer Available Outside The UK?

After hearing about the top shows, you must be excited to set up BBC iPlayer on your Chromecast and get started today. Sorry to burst your excitement, but the fact remains that you cannot access the service if you are living outside the United Kingdom.
Keep in mind that BBC iPlayer is a British-only streaming service. It means that it is entitled to follow some laws concerning the broadcasting of shows outside the territory. Since it has only national broadcasting licenses of shows, it cannot extend its services to other countries.

Can I Watch BBC iPlayer For Free?

There’s no doubt about it. The streaming service comes absolutely free of cost. It means you don’t need to pay even a pound for any shows that are broadcasted on the service. But, once you leave British soil for any reason such as a vacation or business meeting, you would have to say goodbye to all your favorite BBC iPlayer shows and movies.

How To Set Up & Access BBC iPlayer On Chromecast

You will be glad to know that BBC iPlayer runs seamlessly on Chromecast. You can easily set up the player on your Chromecast and cast the shows directly on your Android device for a better streaming experience.

Setting up BBC iPlayer on Chromecast and accessing the unlimited number of shows is easy. Here is what you need to do:

Other Devices on Which You Can Set up BBC iPlayer

BBC iPlayer has a massive fan base. Though it is a British-only service, its fan-base extends to even foreign territories. It is because of the huge popularity of the service that you may now find BBC iPlayer apps across different devices.
So if you are looking for BBC iPlayer setup guides for devices other than the Chromecast, you can check the following links:

You Need a VPN To Access BBC iPlayer Outside UK

BBC iPlayer keeps track of every user’s IP that visits the service. By tracking the IP, the service is able to pinpoint the location of the user. So, for instance, if you are accessing the service from the US, your US IP will raise a red flag to the BBC iPlayer system, which will ultimately block the IP from accessing the service.
You can trick that system and get around the IP monitoring and blocking mechanism of the BBC iPlayer and many similar streaming services by spoofing your IP. And the best way you can go about it is by using a virtual private network.

How To Watch BBC iPlayer Outside the UK

You can easily get around the BBC iPlayer content restrictions by setting up a VPN on your preferred device. Once you are behind an anonymous UK IP address provided by the VPN, you can enjoy all the shows on BBC iPlayer from anywhere.

Since Chromecast doesn’t come with any VPN functionality, you would need to set up PureVPN on a router to get started.

PureVPN is the Best Streaming VPN. Heres Why.

Best Uptime : How would you feel if your connection drops abruptly while you are enjoying a favorite show? Your frustration would shoot through the roof, wouldn’t it? With PureVPN, you are guaranteed the best uptime round the clock.

Seamless Streaming : It would be quite frustrating to see a buffering icon while watching your favorite flick. Well, you can finally bid farewell to endless buffering because VPN servers offer top speeds at all times.

Top-of-the-Line Protection : With PureVPN, it isn’t just the best streaming experience you will get on your Chromecast, but you are also assured of optimal protection because of the highest-level encryption.

Great Accessibility : BC iPlayer isn’t the only top streaming service you can access while using PureVPN. Our app opens the door to dozens of other most-demanded streaming services such as Netflix , Hulu and more.

Now, you have all the right tools to enjoy BBC iPlayer on your TV or any other device. So, why wait any longer? Grab your desired plan, install the streaming service on your Chromecast, and hit play.